Musings and Explorations into Steampunk 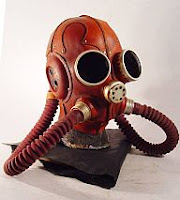 We love all things Roman here at Chez Dropship. This week we've luxuriated in watching the classic HBO/BBC drama series ROME and the UK/Latvian movie CENTURION.

Add an old episode of Time Team into the mix and the threads converge in my head to produce a Roman Steampunk alternative technology world. Sort of Simon Scarrow meets Jules Verne.

Probably more a flight of fantasy as far as 15mm gaming goes but could be merit in 28mm as something different.

Whilst on steampunk,  Mars. Victorian Mars. I'm firmly wedded to the idea of an early Victorian Steampunk colonisation of Mars in the 1850's. Flashman and the Overlords of Mars - that sort of thing. Inspired in part by the famous painting of the last stand of the 44th at Gandamak. 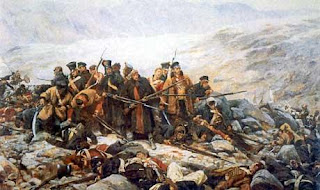 Easy to imagine the guy in the Afghan coat (2nd right, standing) as (Gene Hunt) Flashman holding off the Martian hordes. And East Riding Miniatures do appropriate Colonial Brits in their ERM15 range who only need a small amount of conversion to give them a more off world feel, wearing Martian tribal coats etc. Dixon's Indian Mutiny range would also be suitable with some of Essex's Victorian British officers (with headswops) for characters. It's also easy to transpose the Indian Mutiny to the canals of Mars.

Crimean War figures could be pressed into service, once gain being very Flashman. The best are undoubtably Eureka's 18mm range. The officers are nicely heroic, there's some grizzled Highlanders and some very,very classy British Guards. You can also double these up for Martian invasions of good ol' Blighty in the early Victorian age without a second thought, unlike more traditional Victorian colonial types in pith helmets. 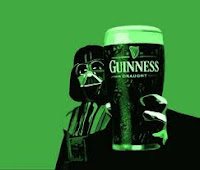 Centurion....Dog Soldiers meets Gladiator. Put tongue firmly in cheek, a couple of glasses of wine whilst watching and it's a good movie, especially as it starts in Inchtuil, just down the road.... Salve!
Posted by Mark at Thursday, March 17, 2011