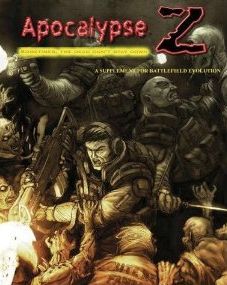 I've returned to APOCALYPSE Z this week.  It's taunting me. Now I can't stomach everything but there's enough of a germ here to create a TW2000esque post comet world order.

And the best thing about it, I can collect a disparate range of rag tag bunch of odds and sods from my favourite 20mm figures on the market without feeling guilty.

Now, part of me wants to fight out a series of loosely related games between survivor factions somewhere in Nevada/New Mexico using  background and ideas from the American scenarios of the original Twilight 2000. I want to add-in not just the average joes, ex-cops and remnants of military units that survived, but bona fide American cultural elements such as Survivalists and Militias.

The other part of me, frustrated in my London Burning post apocalypse ideas through the spare heads I need no longer being available,  now wants to marry Twilight 2000 with Xenophon's Anabasis in modern day Afghanistan. With a nod to John Ringo and David Weber's Last Centurion.

I previously mentioned Elheim Miniatures' 20mm Special Forces/Contractors suitability as survivalists and now want to point you to some very nice figures from Wartime Miniatures in Australia. 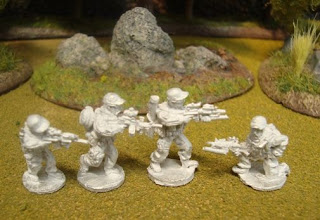 Wartime Miniatures 20mm Moderns
Special Forces/Contractors in Baseball Caps
Is it me, or can you also see John Connor's resistance fighters?

Elheim, Liberation (RH Models), Wartime between them have enough SpecForces and armed 'contractor'  miniatures to ensure we never have to duplicate any figure before we even start looking at regular army options. Add to that a wide range of modern AFVs we can use without being a slave to paper TOEs and it starts looking like wargaming manna.

Move the scene to Iraq and suddenly you have a scenario very similar to Last Centurion. Not only that but Ambush Alley's new scenario book ROAD TO BAGHDAD, soon to be published by Osprey, is perfect scenario fodder!

Your American/coalition forces or SpecForces personnel are no longer trying to overthrow Saddam, but simply get home past resurgent Iraqi nationalists, military outlaws and criminal gangs. All this before the first Zombies shows up.....

Of course, our heroes, whether in Afghanistan or Iraq, may just decide to hole up in Fort Jessica Simpson and become Successor warlords, fighting off 'local' armed gangs or similar Russian, Pakistani, Iranian, coalition, displaced contractor warlords.