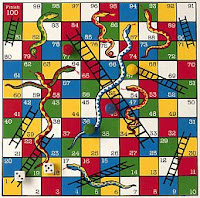 In a Galaxy Far Far Away, I wrote an article about using the kids game Snakes & Ladders as a unique and different morale table for skirmish games.

Thanks to Bob Cordery (Wargaming Miscellany) I've been exploring the abandoned warehouse of wargaming ideas and even full blown games that have been locked away in my head from a different time in my life and I'm going to spring a few on you. So be warned.

Maff (Master Chef) has also been prompting me to blog up some of our mini games. These are generally a set of scribbles on the back of an old envelope or in a notebook that never get written up or fully developed but often provide an evening or two's fun. As an example, the usual sort of thing would be say, a Gears of War (Xbox360) urban game.  The whole thing being light on rules but with the right mechanisms, that encourage fast and furious play reflecting the style of action in Gears of War.

Back to the Snakes & Ladders Morale Engine.  The concept very basically at this time in the morning, is that character morale starts high - can be 100 or lower, 60, 40 etc and then works backwards, as combat saps their combat energy, fear and tension increases etc. Using a D6 each turn, you work backwards. If the character lands on a snake - he has a catastrophic morale failure and slides down the snake. Conversely, you know the game, lands on a ladder, he has a sudden burst of courage...... If any character reaches 1, he is out of the game - runs away screaming, sulks off unnoticed or curls into a ball to hide.

Not convinced? Think of the ladder on square 28 which ascends to square 84 being the result that turns Hudson from zero to hero in the movie ALIENS.

You can imagine that this brings an edge of chaos to the game and I thought it would be particularly good at representing human's first contact with hideous or well tooled aliens.

Of course there are several ways of improving on the basic idea to reflect differences in training and experience, maybe different bands have an effect on combat ability. Of course you may also want to create your own more martial looking table for use in public. But I just wanted to get the idea out there.