Some Thoughts on Force on Force 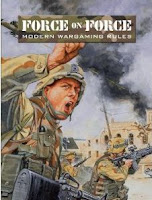 Not long now till Ambush Alley Games' Force on Force is released via the Osprey Publishing stable.

It a cracking wargames publication. The best I've seen to date and a joy to own let alone use. I've said this before. But there has to be more it it than just being pretty, or is it just the Emperors New Clothes - all batter and no Mars Bar?

The truth of the matter is that FoF has it's detractors and it's exponents. It's not for everybody. Let's not pretend in any way, shape or form it is.But if I, yes me, could choose one game system on the market right now to have been designed by me in some alternative universe - Force on Force and I have to say, it's forthcoming fully fledged future variant Tomorrow's War, is it.

In Tomorrow's War, I am delighted Shawn was able to capture my vision of a netcentric future battlefield and turn a few scribblings into a coherent whole without allowing it to overpower the game.

Where they both win for me, is on the granularity they give the soldier and his ability to perform in combat. Together with a combat system that becomes intuitive very quickly.

This is a game engine to savour.  It's a fine dining experience rather than a fast meal. For me a Sunday afternoon where I can think about my tactics to reflect my troops rather than just banging miniatures across the table and rolling a +1.