.
Why does the future have to be so utilitarian? These are called Golly Pods by a company called Tend. When I came across them on the net, what my mind's eye instantly  'saw' was a 15mm Sci Fi high rise living module. Now imagine that behind the greenery in the 'pod' aperture is a full plexi-glass frontage. The greenery could be a cultural throwback or a city corporation planning feature. 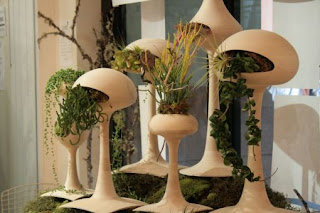 I'd expect buildings like these to appear on an AE Van Vogt book cover. Of course, they could be an alien habitation, advanced intelligence or primitive rock dwellers. 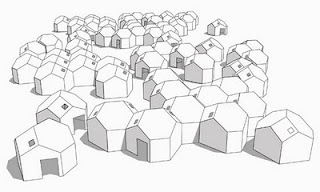 This picture also caught my eye. These are actually pet 'pods' from Plushpod. What I see in the picture is a 'first foot' colony. I like the fact the design of the pods break away from simply being hexagonal.

Now, this Danish round house impresses me..... 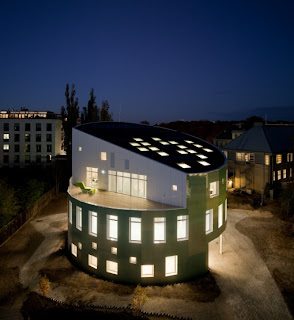 Lot's of 15mm Sci Fi gaming potential and the one base model can spawn an apartment, office or industrial unit. Something that again, breaks away from the Gothic or Sci Fi portakabin buildings we are used to. 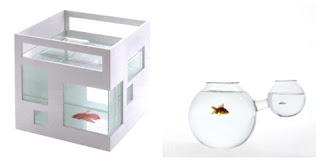 Reminds me of the Futuristic City at Matakishi's Tea House.

Finally,whilst a lot of 'modern' house designs leave me cold, I find this one "funky". Yes "funky" It reminds me of the golden age of Sci Fi movies such as Rollerball with James Caan. Don't get me wrong, I'm not wedded to classic post Norman farmhouse or Georgian townhouse architecture, it's simply that a lot of futuristic design seems to be high on concept, low on form and even lower on function. 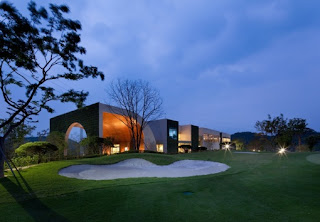 This is not a hab for the masses. Rather it's a futuristic 'mansion' set in manicured grounds and aimed at a rich industrialist, political leader, gliterrati or drug lord. Just ripe for a classic Traveller roleplay skirmish adventure game. Take out the guards and auto-security defences, infiltrate the house..... in fact there's a tale of an attack on a long house in the Anglo-Saxon Chronicles that would transpose perfectly to this futuristic setting. And and possibly Beowulf for a modern age now I come to think of it....


Cheers
Mark
.
PS Luckily I have pre-populated Dropship with a couple of draft posts which can be posted using the iphone whilst the issue with my PC is sorted.
.
Posted by Mark at Saturday, March 12, 2011