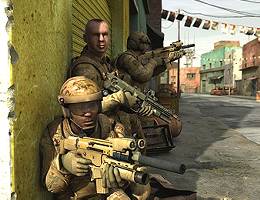 New Vasquez is a town with a certain lived in look. Not surprising as it's built from cat food boxes to resemble a neo-Mexican border ville after Ghost Recon Advanced Warfighter.

Of course that border, is a couple of light years from that intended in the game.

Ran a Tomorrows War mission today. Nothing fancy but enough to have 3 fireteams of 'Ghosts' (Khurasan Feds), running round deploying drones and sensors to equal up a series of firefights with Vasquez planetary militia (Rebel Minis African Militia) and their internal security droids (Khurasan Mekanoids).

The drones and sensors enabled the 'Ghosts' to keep the initiative and race towards their objective, a militia Vid-Feed Transmitter. The Mekanoids guarding the transmitter stole the initiative back, taking down a gunship (Old Crow) that was called in to provide support. I love the gunship rules, so just had to bring one onto the table.

With the bird down, the original mission was scrubbed and turned into a race to save the pilot. Not part of the original scenario like the gunship, but hey, sometimes the story is more important! This was where the Ghosts started to take casualties. Initiative swung back and forth. Finally, the two remaining bots embedded with the Ghosts stood shoulder to shoulder under fire at an intersection whilst the enemy closed in allowing the Ghosts legged it with the pretty (Rafm Traveller) pilot.