.
Lois could see these Mercs were fresh from the kill. They had entered the Bar & Grill accompanied by an almost physical aura of being tired and hungry. Regardless of Ray, and his constant impassioned pleas for portion control, she made sure that as each Merc barked his order at her, she chose the biggest and best steaks to put on the grill.

CanArvR just wanted to sit, wolf down his food and chew the fat with his pack before catching well earned zeds. Maybe it was the way the human was looking at him, maybe it was something he said to one of the other humans - it was immaterial - in a flash the tables were turned over, plasma bolts of many hues sizzled the air....... 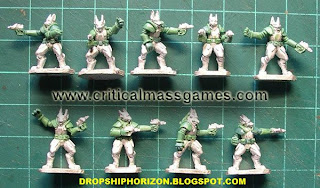 Fantastic. Sorry Craig, they may not be meant to be Vargr but these guys are going to be my Reservoir Space Doggies. I particularly love the figures (top) 2nd from left, 2nd from right, (Bottom) 2nd left and far right.
As for the figure at far right firing his pistol 'Gangsta style'!