.
On getting home from work I checked out last nights work. So, how do the Augmented Battle Suits look to fresh eyes this evening? Well, let's just say I'm basking in my self appointed awesomeness. 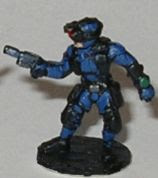 I happened to be playing around with some CMG miniatures earlier to see if I could enhance enhance the number of poses using existing figures. 'Cut and shunts' mostly, you know, this torso on that pair of legs.

By accident I picked up an errant pack of Rebel Mini's Modern Spies which was lurking in the vicinity of my CMG Light Recon haul. Holding up the Rebel figs to the Light Recon I could see immediately that they were very close in height and build. Better still, the heads would easily match the Light Recon bodies.

What this means is that you can easily utilise the Rebel Modern Spies as Secret or Special Forces Operatives for your Arc Fleet figures.

Taking this idea further, I could easily swop several Recon Trooper heads for those from the Modern Spies, to give me 'Ultra' Stealth Recon Troopers.....