.
If you've been following Critical Mass Games news over the past couple of weeks you'll be aware of a race of alien miniatures planned for release in early 2010 called the Praesentia.

Craig kindly sent me several 'TEST' sculpts to give my feedback on. Since photos of the Praesentia are starting to appear on other blogs and forums, I believe 'secret squirrel' status has been revoked, so I'm giving followers of Dropship Horizon an opportunity to see them and provide feedback to Craig and Dale prior to the miniatures going into production. 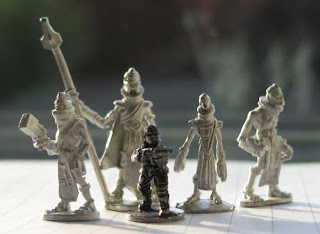 Now, I think the Praesentia themselves are cool alien miniatures in their own right. Never mind the cry from some quarters that two legged, two armed aliens are hackneyed and we must be provided from now on with tentacled bunions. These Praesentia are COOL alien miniatures.

The tallest of the miniatures in the photo, and forget the size for the moment, is a wonderful example of a noble galactic master race. I'm reminded of the alien in Bruce Pennington's painting Space Time & Nathaniel (see here) but over and above that they match my image the highly advanced Protheans of Mass Effect.

I'd love to see more of the type of the Praesentia miniature with spear or plasma lance in a scale that more closely matches Black Hat's Martian Empires range. The Praesentia are supposed to be taller than standard 15mm humans in Critical Mass's universe but they would simply make fantastic Victorian Sci Fi Martians or similar. Black Hat's own 'Imperial Martians', just don't cut it for me personally - too much Chingachgook and not enough 1970's 'Space Time & Nathaniel style of Martian' for my tastes, but in 18-20mm they would fit the bill perfectly.

The Praesentia, regardless of final scale will also make interestingly different characters and alien bystanders/native population in my Sci Fi character skirmish games. You can just see them in the Cantina, strolling down the ramblas of Mudd Eisley or along the corridors of a Space Station can't you! The figure with the pistol on the left of the photo is currently earmarked to be a Bounty Hunter.