.
A heads up guys that LKM/QRF have just released some nice looking 15mm Modern Germans that will make excellent Mid-tech Infantry proxies, and once more, won't simply look like Modern US. Of course, I'll need to add some visors first ;-) 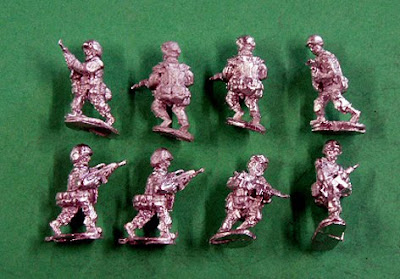 QRF 15mm Modern Germans
MGI01 Infantry advancing with G36, £2.00
There are 6 packs in the initial release: 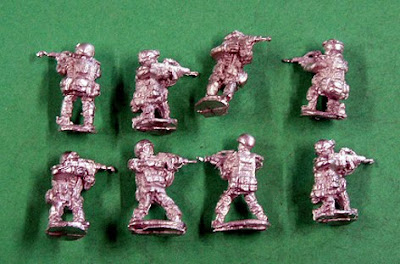 QRF 15mm Modern Germans
MGI02 Infantry Firing G36, £2.00
Modern French and Chinese are on the way too. Corresponding with Geoff, the French will be in the new FRELIM kit. I'm hoping they will make OUDF proxies without the McStarburger 'Royale' look.

There's also more in the way of Modern Brits: - Snipers, GMG, Javelin teams, underslung grenade launchers, command, plus a heap of support weapons including a ground mounted 40mm auto-grenade launcher. If you are not too fussy, some mix and match of the support weapons with the Modern German infantry is possible for a discrete Tom. War force.

Of course, the great thing about the Modern Germans is their Flecktarn camo! Pure Sci Fi, and comes in desert and urban varieties too.

It's worth scanning the QRF catalogue for 'different' Modern kit to equip your Mid-Tech forces. The Yugoslavian M80A MICV being a great example. It's a BMP, but it's not. 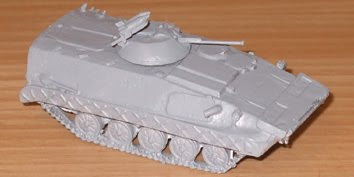 QRF 15mm Modern
YUG02: MCV M80A, £6.00
Both Master Chef and myself use the Brazillian URUTU E11 APC as an off-world para-military police armoured vehicle. The French VAB wheeled APCs, US LAV-AT, plus South African Ratels are equally all worthy of including in your Mid-tech Sci Fi inventory.

Whilst on the subject of Mid-Tech Proxies, I ordered a pack of US Special Forces from Rebel Minis which arrived last weekend.

Lovely figs. Would have preferred leader types in helmets & in combative command poses, but I can work round that in this instance. Will certainly get more with my next order from Mike. Incidentally Master Chef uses these as 'Ships Marines' due to their resemblence to the Colonial Marines on Battlestar Galactica.