.
The Pelagic Dominate make full use of biological terror weapons in seizing other worlds. They mainly take the form of various space horrors - bred, transported, corralled into drop pods before being launched in their tens of thousands on unsuspecting planets. On the ground, the drop pods spring open to unleash the terrors and spread confusion and panic amongst defenders and civilians alike. 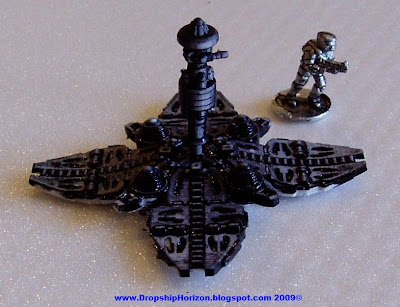 Khurasan Miniatures 15mm Sci Fi
Pelagic Dominate Drop Pod
$3.99 each (provisional - to be confirmed)
The Drop Pod comes as a two part kit - base, which represents the landed and open pod and the central column, with a small remote auto-cannon.

An amazing amount of detail is present on both the top and bottom of the drop pod. This allows you to model the pod in crashed or semi open condition - if you want to go to that amount of work.

The Drop pod measures 6x6cm and stands 30mm tall with the central column in place.

I have a couple of these Drop Pods already because I thought they would be immensely useful to mark the extent of drop zones and represent infantry drop pods regardless of their physical size on the tabletop.

I've only recently read that Ridley Scott is in talks to do a new Aliens movie, this time with Predators dropping the Aliens on Earth in drop pods. You've got to admit that Jon at Khurasan is ahead of the wave! - I can already see the Ambush Alley or similar scenarios where the Drop Pods land on present day Earth creating 'hotspots' out of which come tumbling the Khurasan Space Demons!