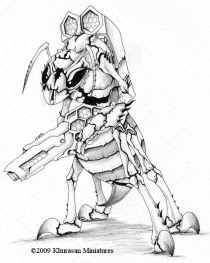 These predatory sentients live in teeming hives dominated by a hierarchy of queens, from the lowest commanders, the sub-queens, to the greatest Vespulid of the swarm, the Queen of Queens. They are a space faring race and infest planets by means of their nest-ships. Often their most terrific battles are between rival hives. Vespulids are the only known natural predators of Space Demons.

The small arm of the Soldiers, the ion shotgun, is a deadly weapon and its ionized particle blast can even disable heavy armoured vehicles, but has an extremely short effective range. In order to close the range quickly the Soldiers hurtle toward the enemy wearing rocketpacks, dodging defensive fire then swarming the foe. If it comes to close combat, the Vespulids are prepared, having vicious mandibles and a highly toxic poison stinger with enough venom to kill a human in moments.

The line will have about seven poses of Soldiers and a sub-queen commander. The extremely talented Pierre Francois Jacquet has agreed to make the models. The line won't be available for a while, but we thought you'd like to see the concept art. 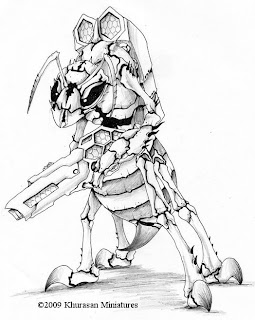 If any models will every cry out for being painted black and yellow, it is these!