THE BOOK:
80 pages, A4, colour photos inside front/rear covers, including:

- 20 pages of core rules
- 2 pages of optional rules
- 4 pages of unit classification
- 5 pages of game set up and playing, including 2 pages of scenario templates
- 14 pages of specific rules within the Army List section
- 14 Army Lists
- 2 pages of point values for army creation
- 1 page of counters to photocopy
- Illustrated examples of game play and rule explanations throughout
- 2 pages of A4 Doublesided Quick Reference Sheets

An element represents one playing piece, being an individual tank/apc/flyer, or 'stand' of infantry/droids/aliens etc. 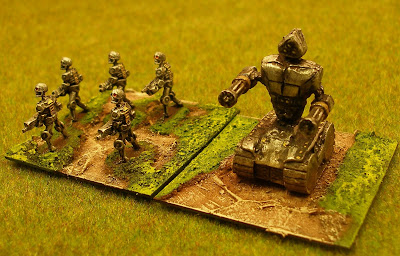 In the rules, any number of miniatures can be mounted on a base which is referred to as a
'stand'. Five figs are recommended on a stand for infantry, 2-3 for droids or monstrous creatures, whilst machines/vehicles are mounted individually. However a pragmatic play with what you've got philosophy is adopted throughout the rules.

The recommended base sizes are 50mm square for most infantry, droids and aliens, though vehicles and flyers generally 50mmx100mm, or 75mmx100mm for Monstrous creatures, dropships etc.

PLAYING AIDS REQUIRED:
Normal 6 sided dice (2 per player recommended)
A tape measure
Counters/markers (a page of printed counters denoting 'hits' / 'pinned' status etc is provided in the book for you to copy and cut-out)

Normal/Fast Move is self explanatory.

Armour Save represents the armour and protection of the element. This is the minimum score required on a D6 to prevent a hit.

Cover Save is an indication of whether an element can make use of cover.

Ranged Weapon describes the primary ranged weapon type eg 'Small Arms'/'Heavy Weapons'. Note that weapon ranges are stylised and somewhat arbitary. but this is a deliberate approach for the sake of game play.

Shoot Reaction describes the type of reaction move that particular troop types must take in addition to any hits. 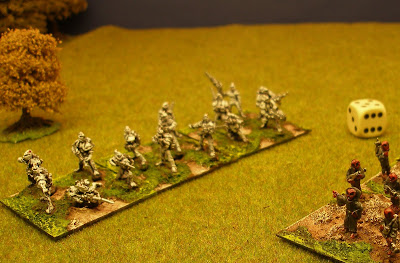 All units can attempt to make one of the following actions each game turn:


COMBAT:
The base score required to hit a target is 7+ on 2d6. Successful rolls on the target will incur either Reaction Moves or Hits plus a Reaction Move. The usual range of modifiers and saving throws will impact on the final outcome.


THOUGHTS:
Sounds simple? Well, the author, sets his stall out straight away. This isn't gritty, count yer ammo and multiply by the FPS of your muzzle velocity SpaceDirtGrunt. No sir Master Chief! Alien Squad Leader is B-Movie Science Fantasy territory. Inspired by Wargames Reaserch Group's DBA/DBM ASQL has a shake of HOTT and a twist of Warmaster to make the perfect gaming cocktail.

What you get in Alien Squad Leader V2.0 is a game crafted to sit comfortably within it's self-declared genre and as a result it simply cannot disappoint. It is tactically challenging, not through a myriad of weapon and vehicle stats, but due to carefully honed army templates which encourage you to play to your own forces' strengths whilst punishing your opponents weaknesses.

And it's here that ASQL-2.0 wins hands down before we even get to the tabletop and roll the first die. The army templates are inspired. There are 14 Army Templates from Human Imperial thru Outlaw Gangs, to Tripods, Alien Greys and Victorian Imperial each of which has a life and character that goes beyond armour stats and saving throws.

You simply WANT to collect and play with these armies. And, given their size there's NOTHING to stop you building one of each of the template armies or even more than one of each eg Human Colonial, Alien Imperial or even Mechanoid force, to make use of all the fantastic miniatures now on the market. What's more each 'army' can be a discrete project to collect, then paint and assemble in a weekend, two at the most.

Alex Self should be carried shoulders high around Bristol. ASQL-2.0 is wargames FUN in it's purest form.

To learn more about Alien Squad Leader v2.0 go to:

I'd like to take this opportunity to thank everyone
who has supported both Dropship Horizon
and me personally over the past 10 months!
Cheers
Mark
.
UPDATE

Those great folks at 15mm.co.uk read my review and wanted to give you the opportunity of picking up your own copy of ASQL 2.0 at 10% off list price!