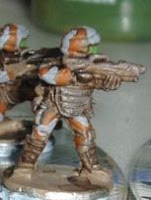 Work has been BLEUGH this week and totally emotionally exhausting. Salvation lay not in the blog but 'speed' painting a platoon (36 figs/12 bases: an FWC Company) of GZG Free Cal-Tex over the last couple of nights.

The funny thing is, they've been sitting on a bookshelf primed and ready for several months but I just couldn't find the enthusiasm to paint them. Partly because their relevance has declined with all the new 15mm Sci Fi miniature releases on the market, but also due to what initially had been a poor choice of undercoat/base colour (Citadel Khemri Brown).

To cut a long story short, I finally decided to 'sacrifice' the FCT and test some painting techniques and different ways of applying camo schemes. The result of my first test mini was quite impressive, so I painted a second, third, fourth.......

The camo on the 1st squad looked great, especially given I had painted them at 1 am in the morning. But next evening as I inspected them again when I got in from work, I found that whilst they looked cool 4 inches from my nose, the colours 'disappeared' into a brown fug when they were placed on the tabletop. 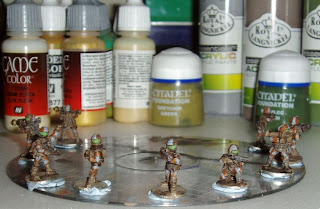 In Progress Photos: GZG 15mm Free Cal-Tex
And this is the rub. Like everyone, I want to have really well painted troops, but equally, I want them to look good 4 feet away on the tabletop under the Kitchen lights. This is after all, how they'll be viewed 80% of the time. So I compromised, and was more liberal with the camo accent colours on the remaining figures, which in turn speeded up the whole task. And you know, the overall effect for the energy and time expended is not shabby at all.

Here's how I painted them:

1) Bare Metal. Dilute Citadel Khemri Brown (Foundation Paint) and brush liberally onto figure. The paint will settle into the detail leaving the raised areas with a metallic finish - don't worry about this.

2) Drybrush Citadel Commando Khaki. This will hide the majority of the semi opaque metal finish on the raised areas.

3) Dilute OOP Citadel or similar brown ink. Apply to creases, edges and armour with a small brush. Wipe off exposed areas with finger. Do NOT 'wash' the whole figure as the finish will simply look dirty. Sounds fussy but it's actually quite fast.

If you like khaki, and want them to be Sci Fi Toms, especially in some W40K trench warfare setting. Finish there, ignore 4) below, because they look the part right now.

4) Three brush strokes of Citadel Vermin Brown per arm, two for the front/side and one for the back of each leg Fortress Grey in between the Vermin Brown swathes or anywhere else I felt needed to be 'lifted'.

TIP: Dilute the paint if you want a more subdued and 'realistic' effect as the edges will feather. Dilute the paint on your palette, wipe the brusg dry, pick up small amounts of diluted paint on the tip of the brush - but not so you have a small ball of paint at the end. This is more time consuming.

5) Run brown ink around inside edge of helmet visor. This will make it much easier to paint the visor as you won't have to go up to the edges!

6) Helmet Visor, Citadel Goblin Green. Accent with some yellow mixed into the Goblin Green or a diluted swipe of Gold. Any oops! moments can be fixed with brown ink.

Done! Steps 2-6 on 36 figures in one evening and 1.5 hours in the early hours of the night before. By the time I finish the details and get them ready for basing, say two to two and a half evenings.

Finally, I'm going to drybrush the weapons for a sand' camo finish and give the figures pale blue hands to emphasis that under all that gear, they are clone grunts.

What do you think?