Bloodletting on the Sweeney Todd 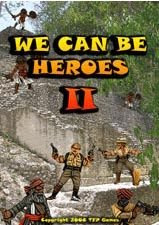 WE CAN BE HEROES II from Task Force Productions is a great set of Pulp Character skirmish rules! It has some good mechanisms which work well within the overall game framework, which is loose enough to allow you to play games from Ancient Babylonia to the Far Future with ease. Everything you need to know about them is here (Click for pdf). The rules are even on sale until the 10th July, so if you hurry you can pick them up for the paultry sum of NZ$9.99! And yes, they are illustrated throughout just like the game concept pdf. Makes the game very easy to pick up and play.

I'd wanted to try 'HEROES out in a Sci Fi capacity so the new Garn from Khurasan Miniatures and GZG's new Ravagers provided a perfect excuse......

SCENARIO:
It was a risk, but Harry Regan believed life was there simply to take risks. As the stars disappeared in the shadow of the alien frigate, on the Sweeney Todd's imager, he wondered if the risk this time had been just too great....

"HUMANKIND" the voice deep and gravely with a slight rasp resonated from every plate in his ship. "HUMANKIND....Do not resist, or you will be filled with pain".

Penny Woo, the ships engineer, let out a little gasp "Garn!", her pale blue skin still alluring to Harry despite the evident danger of their situation.

Harry turned to Jack Palmer, his No.1 "No foo-king lizard's gonna take my cargo or my ship. Got It!"

Armed with whatever the miniature was armed with.

THE SWEENEY TODD:
The Sweeney Todd is a 'Pizza Class' Rim Freighter. It's design is based on Pizza bases. Upper and Lower Cargo Bays - pizza bases connected by a ramp (corridor section), Engineering and Life Support (pizza base), connected by corridor to crew quarters and utility areas (pizza base, connected by another corridor to the Bridge - pizza base. No Pizza's were harmed during the making of this starship but all were enjoyed immensely. My vison was of one of those long thin spaceships such as in Danny Boyle's SUNSHINE.

One of the things I picked up whilst playing MASS EFFECT on the XBOX was that you don't need complicated corridor and room layouts to make for an interesting playing arena, Use props such as containers and stacked packing crates to build visually appealing and tactically challenging layouts, which can then be different every time.

THE ACTION:
As the boarders, initiative lay with the GARN. Glixx and his team stormed in through the Lower Cargo Bay to be met by a hail of gunfire from Jack & Mr Tetley. Unfortunately the Garn's heavy hide and energy shields protected them magnificently with good saving throws. The retalitory fire from Glixx took down Jack almost immediately.

Gaxx now boarded the Upper Cargo Bay. Dogfart & Xien were luckier and in a running fight between packing crates took down a Garn warrior. Mr Tetley was wounded and couldn't stop the Garn from making it up the ramp to the Upper Bay. Glixx finished him off in Close Combat but was himself killed by a grenade as Mr Tetley makes a final successful Skill Check, hissing "Dies youz Mudder."

Penny decides to leave Engineering to the droids as the sound of battle becomes a crescendo in the Upper Bay. Passing a Skill Check she leaps onto the Mule and turns the gun onto the Glixx's now Unled Garn maneouvering around from the boys. The heavy slugs from the Mule's auto-cannon kill one and wound another Garn. Dogfart & Xien break for Engineering under cover from Penny but Xien is shot down. Dogfart uses his Heroic activation to round on Xien's killer, wounds him in Close Combat but the physical power of the Garn prevails.

Penny devoid of cover is wounded (reduced by a Hero Point) and dragged to safety in the nick of time by Harry (Heroic Move) . Kara helps Penny back to the Bridge as Harry fights a lone withdrawal through Engineering, his 12mm Geezer Automatic doing damage to the Garn but the dice aren't with him. The droids wound a Garn but are turned into scrap in a single charge. Still, they manage to slow Gaxx down sufficiently to allow Harry, Kara and Penny an opportunity to get back to the Bridge for the final showdown.

The Garn regroup and form a single team under Gaxx, who is happy enough now he is Captain at long last. He leads them down the corridor for the kill. At this point I roll for Carter - craven coward or....roll again.....good enough to scrape by .....hero! He levels a CO2 fire hose as the last Garn passes and fills the corridor with the -60 gas.

Harry and Kara are watching from the Bridge's monitors and see the cold blooded creatures brought to a standstill by the sudden intense cold. They pop the hatch and all three Blaze Away at the alien boarders. A Garn goes down, Kara drops, Gaxx is wounded. It's enough. Gaxx unleashes an 'ink' bomb to mask a withdrawl to his boat, content with the prize of being elevated to Captain status now Glixx was gone. He wanted to savour this 'promotion'.

DEBRIEF:
'HEROES encourages a more cinematic style of play and I took some liberties in the course of the action. Heroes can be just that in the game and their additional Activations enable them to have that 'heroic' edge you want without it becoming just a +3 to every die roll. Activations are key. They keep the game flowing back and forth between combatants. Always try to think ahead to your next Activation. Gamewise, yes, Harry should have mustered every gun at the Cargo Bays right from the off, but where is the fun in that!

Harry as always has the last word "I know someone who can knock out these Garn as great handbags. Maybe we should think wholesale!"

Labels: After Action Report, We Can Be Heroes II