It's All Going A Bit Critical!

.
Imagine. It's been a frakkin tough week with demands flying in from every part of the organisation like shrapnel. On the way home on Wednesday, I wound down by watching a superb HALO fan flick downloaded from YOUTUBE. This is an excerpt:


The full 8 minute movie can be seen here -
HALO MOVIE: First 8 Minutes
I thought that this would be awesome recreated in 15mm. In my head I can see it being played out on the table with the yet to be released FORCE ON FORCE: Sci Fi rules. Only, no figures on the market currently match the power and dynamism of the combatants on the screen, with the possible exception of GZG's all new NAC Marines. 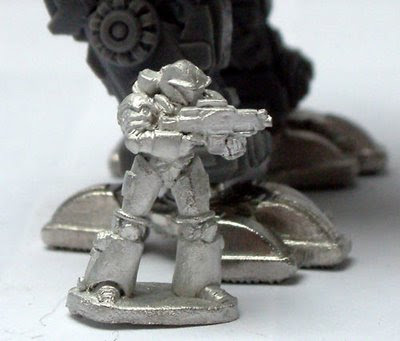 CRITICAL MASS GAMES:
15mm Sci Fi ARC Fleet Trooper
You can guess how my jaw hit the floor when I opened up my mailbox once home to find the photo above from Craig of CRITICAL MASS GAMES. Stunning, simply bloody stunning. I was bouyed up through the last two exhausting days by the 'promise' of games yet to be played represented by this miniature. In fact, I'm looking forward to getting my hands on them just to paint and have been scouring the galleries and painting/modelling threads in the DakkaDakka forum for ideas.

And if that photo wasn't enough, Craig has sent me this concept artwork of CMG's first batch of releases. Ladies and gentlemen, let me introduce, the grunts of Humanity's Arc Fleet.....