The Face of Command in Miniature

The question has been posed to me more than once, "what you would like to see “command” look like?" In short, my vision of command figures are miniatures who look like they are leading men in action.

It's a personal thing, I absolutely hate team, squad and platoon level leaders reading a map, looking through binocluars or standing bolt upright pointing/talking into radio. Put the kiss of death on more than one range of figures for me.

This image says it all. Even though he is kneeling, there is dynamism, force and command presence. Also note that his weapon is at the ready, not dangling like a handbag as we see on some miniatures. You could even take the entire torso and transpose it onto braced or running legs.

Take a look at this promo video for Ghost Recon Advanced Warfighter and study the leader carefully. His gestures, his movements and most particularly his stance.

Notice how the weapon is ready at all times, gestures snappy, stance alert in a semi crouch and not standing bolt upright. 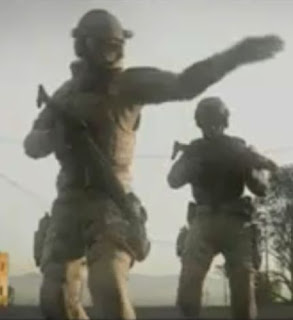 How often do you see a raised fist HALT gesture or a hand splayed on helmet for RALLY ON ME? 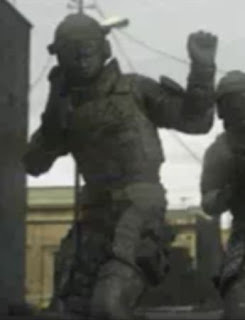 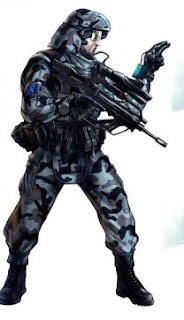 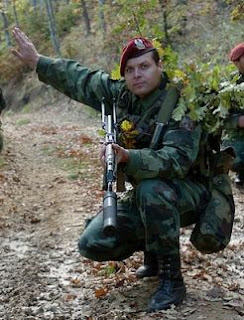 Tell me if I'm wrong, but to me team, squad, platoon leader miniatures are more important than the ordinary grunts. They give the unit character. I think Flames of War generally does a great job in this respect and recent WW2 Soviet releases at least have been brimming with different leader figures - not just one pointyfinger bloke who looks like a traffic warden directing tourists to Harrods. Plus you've got to use him as every team, squad AND platoon leader in your tabletop outfit.

Certain aspects of future command on the battlefield may do away with the traditional leader as we know them. Every man may be their own boss, or they will be reacting to commands on the CrossComm beamed via satellite or direct from a HoloCommand Centre somewhere in orbit. But I hope this provides some inspiration for the lower tech grunts who will still look to a man with cohones to lead them when the dog hits the fan.