.
When the sitreps are critical. When the chips are down and there's no time to bleed, the meanest, badass hombres the Arc Fleet can call upon are the Augmented Drop Troopers. 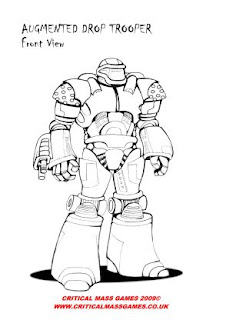 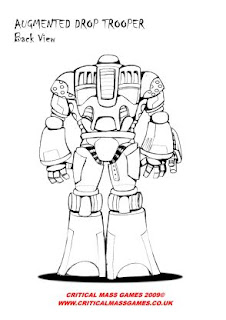 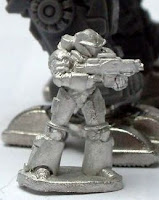 Where space is at a premium to bring heavier firepower to bear, the Augmented Foot Trooper deploying shoulder mounted weapons provides a significant local force multiplier to the commander on the spot. 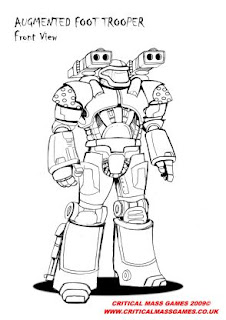 Augmented Foot Trooper
with shoulder mounted weapons
In size and bulk, the Augmented Drop and Foot Troopers are necessarily larger than their brother troopers in the Arc Fleet being the equivalent of Power Armoured infantry. You can see a good idea of the comparison sizes in the chart below:

(Click on picture for bigger version)
There will be two packs of Arc Fleet Augmented Troops, codes AFAU1 & AFAU2 in the first release from Critical Mass Games planned for the end of August 2009. Each pack will contain two each of three different miniatures.

My thanks to Craig at CMG for sharing these concept images of his 15mm Sci Fi Arc Fleet range. I hope to be able to post photos of WIP on the greens later in the week.