Meet Harry Regan, Captain of the freelance Rim freighter Sweeney Todd. I really enjoyed playing the We Can Be Heroes game reported in the previous post. I was turning the game over and over in my head. Something sparked and it came whilst listening to a particularly good Tales From The Verse fanfic called Under The Gun. I could only picture Harry and his crew, my crew as the protagonisti of the story.

It struck me as I continued to listen, if Firefly can lift the culture of the American West and drop it into a universe of the far future, why can't I do the same with 1970's TV gangster chic Britain? Expand upon my original scenario, create a background Life on Mars would be proud of and we have an ad hoc character based skirmish campaign that is essentially 'Geezers in space'. 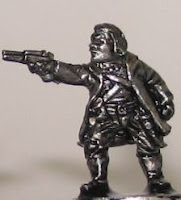 Over the coming weeks, I will be reporting to you the adventures of Harry and his crew as they blag their way through the East End of the Bermondsey Cluster's outer rim. There's enough poppy to be had for the right crew to make a pukka living and Harry won't allow any alien slag to get in his way.