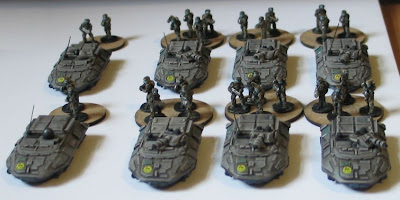 2 MICV Platoons each of 3 squads
Coy HQ of 1 Command, 1 Area Defence/Scout element
I'm planning on rounding out the company with a light grav tank platoon plus additional support in the form of a minimum of two GZG UAVs. These are currently waiting to be painted.

I've used up all my unpainted GZG New Israeli miniatures so I might just ditch the dismounted scout element in order to have four figs on each base in the MICV platoons. I have some spare A.I. minis - actually 6mm Mecha - who could replace the human scout team.

I'm also toying with the idea of including a shaman in the command team similar to the 'wizard' played by Japanese actor Mako, in Conan The Barbarian. Whilst 'magic' has no part to play in my futuristic reimagining of Hyboria, I think it's important to retain the 'elemental' aspect of Conan's world.

This Grav Assault Company continues the historical tradition of the Hyrkanian mounted horse-archer. Debate rages in higher Hyrkanian military circles, but the primacy of fast, swift, mounted warfare remains dominant in tactical thinking. MICVs are therefore small but powerful with a 3-4 man dismount element. The dismounts are subordinate at all times to the vehicle commander who controls the firefight.

Often two tank platoons are combined with two MICV platoons plus command and support elements to create a 2 company Mechanised 'Gallop' Battalion. These are raised and manned along tribal lines. They operate as independant fighting units in the vast steppes of the northern provinces under the overall operational command of the Hyrkanian 4th 'Red Sonja' Armoured Division.