.
I can say without contradiction that this model is the most sophisticated and beautiful 15mm Sci Fi armoured fighting vehicle currently on the market. It is so 'out there' no other manufacturer's 15mm products come close to it. Khurasan Miniatures have just rewritten the rulebook with their new Man of War APC. It is every bit what you would imagine a 'high' Science Fiction armoured vehicle to look like and appears to have stepped out of almost any Asimov book cover illustrated by the great Christopher Foss. 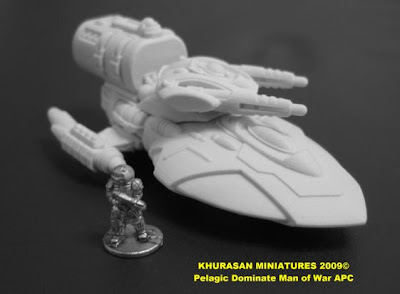 The Pelagic Dominate Man of War APC from Khurasan Miniatures is an all resin kit which comes in 5 main pieces plus a metal flight base. 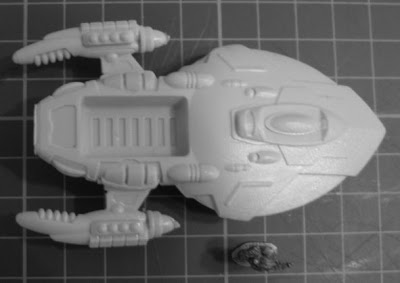 The parts consist of arrow head shaped hull, barrel troop compartment, turret with twin cannons and two propulsion pods. Assembled it is 95mm long and a maximum of 60mm wide. It is NOT designed to carry humans/humanoids but an entirely different race.

Being all resin and very detailed there is some cleaning and assembly required. Nothing arduous though and well within everyone's ability.

Leaving off the elaborate troop compartment and turret superstructure, as in the photo above, it is still a beautiful model, which can be used as an open back command, troop or weapons carrier. 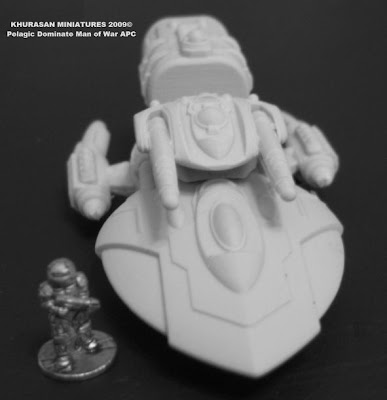 The Pelagic Man of War is a sleek and very very sexy machine which either deserves a garish colour scheme inspired byone of Chris Foss illustrations, or perhaps something more subtle like this....... 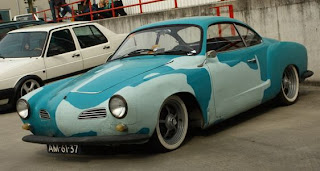 As a tribute to Foss's superb illustrations, I think this camo scheme is perfect:

The Man of War is a stunning piece of workmanship. If you like 'high' Sci Fi rather than gritty armoured boxes on tracks, this is for you! It doesn't matter whether your 15mm Sci Fi armies are Human or Alien, the Man of War APC deserves a place in your collection. 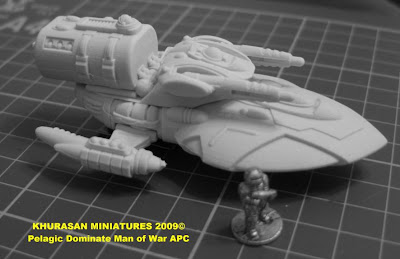