These are my 'Spartan' elite Assault Troops for FWC - a work in progress. Still have to paint the weapons - possibly an ochre-sand colour to look like plastic/composite camo'd casings; and maybe some flashy insignia on the shoulder plates. 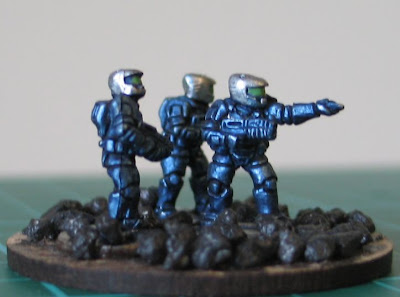 The 'rocks' you see on the base are an aquarium product called Roman Sand. You can buy it quite cheaply from most pet stores in lots of different colours including deep red and flame orange. I chose the black as it looked like bleak volcanic rock. As an experiment, I've mixed PVA glue with a cheap dark ochre acrylic paint from the Royal Langnickel 'Essential' Acrylics range, dropped the 'rocks' on and voila! Instant basing!

It's worth looking out for the 'Essential' Acrylics range, which is superb for terrain and general art projects. The local art shop sells these in 59ml bottles (2 fl oz, in old money) for just £1. Yes, £1. Checking the forums, some guys swear by them for their miniatures too and I'm not surprised when Citadel pots are around £2.25 for 12ml.

The base isn't finished as the volcanic effect of the rocks gave me the idea of trying to paint rivulets of lava flowing between the rocks similar to the picture on the right. See also Gavin Thorne's work on the DakkaDakka forum (Click here). Will it be too fussy for 15mm? Dunno, but I'm willing to give it a go. It may mean having to repaint the visors red to match the terrain.....oh bugger! A lazy painters' work is never done!