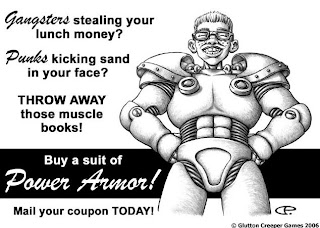 Matt's previous posts (Alien Life Forms and Non-Biological Life) have sparked some great discussions. To continue this series, we will now examine the various forms of human Power Armor available in 15mm Sci Fi.
Starting with some of the oldest sculpts still available:
Those are all classic minis - lots of character and sentimental value for many 15mm gamers. But if you want something designed by our current crop of manufacturers: 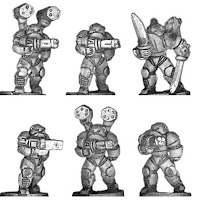 But we all know that the 15mm Sci-Fi renaissance has really only existed for the last few years. The manufacturers driving this product boom have produced some of the best Power Armor available:
There are even more Power Armor troopers coming in the future.
So far we've looked at (I hope) all of the suits of Power Armor available. But sometimes a suit doesn't cut it.. and where do you turn when you really want to crank Power Armor "up to eleven?" 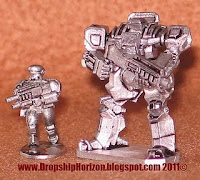 Hopefully this list is useful to everyone!
Cheers,
Chris