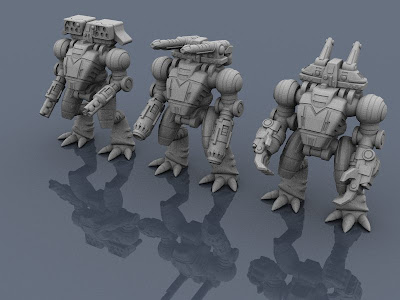 The Ygs Fighters are by far my favourites from the new Mercenary releases. There's just something about the figure with the helmet that makes him a great non-human intergalatic cop. The miniatures have a great deal of character and I think over and above being characters in their own right they will make good corporation mercs or starport security in games such as Mutants & Death Ray Guns.

It's difficult to know what to say about the Kaamados Dominion Agaamids Battlesuits - they break with 15mm conventionality and you know, when you put a platoon of them tightly packed in a ship's corridor (yes, I have a platoon worth), they are effectively menacing. I visualise them advancing slowly but determinedly like the Battlesuited Mondoshawan arriving at the beginning of Fifth Element. 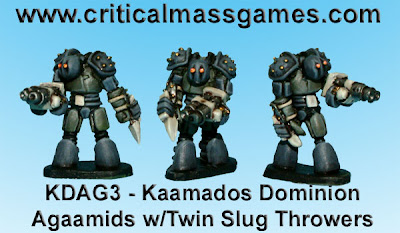 The photo below shows the relative size of the new Agaamid minis against a Critical Mass Light Recon trooper. 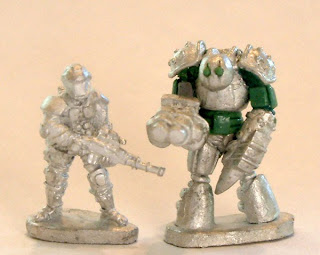 Even if you have no space for an army of Agaamids in their own right, these minis could potentially provide some interesting colour and heavy firepower to any human or even alien force in the form of robotic infantry or synthetic drones.

.
I've been following Jason's work over at Micropanzer.com for some months now and have to say that I love his concept work for Project Slipstream. 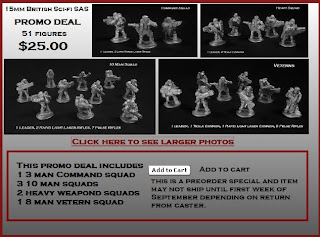 Get yourself over to Micropanzer and take a look. 51 SAS? Now that's an ARMY!!! I like the idea of having some dedicated futuristic British figures - these are going to be a Tomorrow's War favourite.

.
Inspiration has come knocking alongside 15mm.co.uk's new Octopod releases! Perhaps helped by the fact I've been cast into a leading role with the Union over the last fortnight, I've used my morning train communte creatively to draw up the outline of a game system for an uprising and rebellion by subjected and downtrodden Octopod (sic. Ood) workers in a city sized factory complex.

ZZ Octopod
"Coz every girl crazy 'bout a sharp dressed man!"
The idea is to use all the different figures in the range as different classes of workers, technicians and specialists. Some will be more prevalent in certain parts of the complex than others and will have different tools, equipment and chemicals at their disposal that can be turned into weapons according to their skills.

.
My Octopods have arrived from 15mm.co.uk, and very nice they are too in a very Ood sort of way. Definitely worth getting for a couple of games based around a Critical Mass Games Refinery or GZG shanty town.

Looking at 20mm Moderns, I have to say that the whole thing has made me appreciate 15mm Sci Fi manufacturers more. Particularly just how easy it is to purchase the miniatures and accessories from GZG, Critical Mass Games, 15mm.co.uk, Khurasan, Rebel plus others. ALL give largely unparalleled service with quick, if not near light speed turn around for orders. 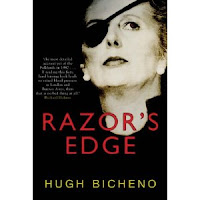 Been reading Razors Edge by Hugh Bicheno on the train. Whilst not ostensibly Sci Fi, being about the Falklands conflict - turn the Falklands into a moon or mining colony, Britain and Argentina into two spacefaring powers and you simply wouldn't believe the story if it was a Sci Fi novel. Think of the landing at San Carlos as making planetfall. The best book I've read about any conflict - the egos, the posturing, the mistakes, the risks, the chances of war, the cover ups. The whole good, bad and the ugly of conflict on a world stage.

As the 20mm Polk are making it difficult for me to spend my hard won and fast disappearing earnings on their minis - time to brave the exchange rate, buy some Lhurgs from Khurasan, finish off my Wasteland Warrior ASQL2.0 army and get that third platoon of Special Assault Brigade troops before the Pound finally goes to hell in the last government handcart before it gets out sourced as well.

.
Something very interesting has happened at 15mm.co.uk. Gavin and Alex have released three new packs of 15mm Sci Fi Octopods! bringing the total number of packs in the range to four.

15mm.co.uk 15mm Sci Fi
NEW! HOF61 Octopod Seer Guard
I was instantly taken by the industrial drone nature of these minis and have some on the way. I envisage them having a more post apocalypse MADRG role than Sci Fi as slimevil would be harvesters of the planet's remaining chemical resources (or humans). But I also see a scenario where they are colony worker drones rebelling against their human corporate masters who contemptuously call them "squids".

IN THE PIPE... Khurasan 15mm Lhurggs

.
Jon at Khurasan Miniatures has pulled off another cracking masterpiece with his new 15mm Sci Fi - Post Apocalyptic Lhurggs. I really, like the look of these minis. They move immediately to the head of my Sci Fi wishlist. 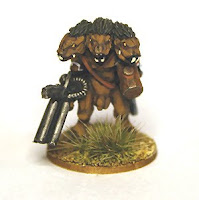 This miniature just blows me away.
An excellent character or Grendal like monster
within a Mutants and Death Ray Guns setting.

Heather thinks the Lhurggs would be perfect for a Post Apocalypse safari (a twist on the human hunt in Planet of the Apes, 1968). So with that in mind, here is a comparison photo with one of Jon's new Post Apocalypse Warriors. 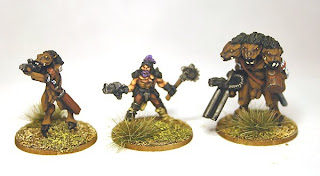 My mind is racing with ideas for them already - not just PA, but indigenous raiders on colony worlds, auxiliaries, scouts etc. They would also make a great addition to several Alien Squad Leader armies.

They are at the casters, so should be available any time now.

I've not been in my study at all this week and consequently haven't painted or taken photos of Piotr's excellent Pole Bitwy15mm Sci Fi and other miniatures.

So apologies to Piotr and those of you looking forward to see them!

I think it only fair to let you know on Stonewallfigures.co.uk that I liaised with Mark and Im confident enough to place a second order with them.

If you are interested in the Combat Miniatures Modern ranges - please note that you only get 5 figures in a pack despite what the website says and displays in some of the photos.

Just want to say thanks to Mike McEwan (aka MajorMike) for stopping by at the crack of crow this morning to drop off some of his original Hotspur 20mm Falklands era minis, making up for my disappointment (read: sheer bloody anger) with Stonewall and allowing me to push on with the The Winter of '79. These Hotspur minis provide me with a good range of SAS types plus shabby soldiery in British kit to act as rebels, revolutionaries, Union militia etc.

Now, I've assauged my early 80's retro for Hotspur minis, I'm turning to Rolf Hedges and his incredible range of 20mm miniatures to fulfill the open civil war side of the project.

If anyone is going to Devizes on 17th/18th July and is prepared to pick up two packs of URBN7 British Army Internal Security 1970's (with SLRs intact) on my behalf, please leave a message below.

Work, industrial relations and personal relationships have spirited away most of my time over the past couple of weeks. Things have generally been on an up, culminating yesterday in a meaure of job security for my current post.

Still waiting to hear about the job I applied for last week, but immediate pressure is off. My team has been reduced from 19 to just 10 between January and May, then reduced again down to eight in the last few days. Let's just say I drew one of the lucky straws.

On Thursday I was asked to join a meeting with our new Head of Service. We were asked to come up with a strategy for the new enterprise programme office reviewing current projects against the shifting organisational requirments. Friday, I get into the office at 7.25am, picked up a marker pen and by 7.30am had created FutureSmart: A Total Vision Approach on the whiteboard. Job Done! The old Mark is back!


Next week, a few days leave, so we head well and truly back into the cauldron of 15mm Sci Fi on Dropship Horizon. I'm looking forward to painting up some new stuff from Pole Bitwy and will be reviewing them daily here on DH. 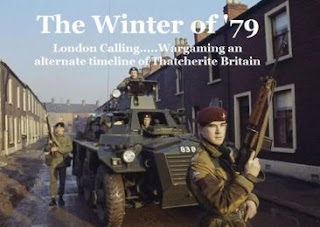 Look out also for my new blog called The Winter of 79, which supports our latest gaming project set in an alternative timeline of the late seventies and early eighties.

Followers of this blog will know that I don't have a bad word to say about figures or manufacturers. If I don't like a product it generally doesn't appear on Dropship Horizon.

My order from Stonewallfigures.co.uk arrived today. I am less impressed than if I'd never received them at all. The order was incomplete - no word why, no apologies for the delay, no response to my communication.

Taking the individual packs out, I wouldn't have been surprised if they had old Hotspur labels - they looked so scummy and beaten about. Certainly not new castings. Stonewall had used a flimsy padded envelope so a good number of the minis were bent at crazy angles to their base. Did they buy them at a Bring and Buy to fulfil my order?

Both the British Infantry Moving and MAWC packs show 6 figs on the website but only had 5 miniatures in each. Most annoying of all, was that half the SLR's, the defining feature of these figures, had their barrels missing - not even rolling at the bottom of the packets (still no excuse in my book).

Master Chef had a similar experience and had to pester them by phone to get his order.


Compared with the service provided by David at Britannia Miniatures plus the quality of the casting and packaging - Stonewallfigures.bastard.uk suck!

It is a real shame that Dave Allsops legacy lies with these people.

Master Chef and I have decided to pull the plug on 15mm Moderns. Looking at the quality of poses and sculpting in the latest 28mm Empress and Eureka Moderns, plus the sheer range and character of minis available in 20mm - after much discussion, we both feel that what we as gamers are being offered in 15mm just doesn't compare.

For years I've held off buying RH Models Russians waiting for comparable (not just any) figs in 15mm. Oh, and 1970's is not Modern in my book. I'm still waiting.......

Add to that, our gaming is changing from 5x8ft 'company' level games to smaller and more discrete Force on Force, Ambush Alley and Flying Lead affairs between a couple of squads max with perhaps games over several linked missions or 'acts'.

Starting in 20mm, Britannia and Platoon 20 have come up trumps but we've both been let down by the service from Stonewallfigures.co.uk. 5 weeks and not answering my emails is not acceptable in my book. Simply not prepared to order from them by mail order in the future.

If any UK followers of this blog are going to Bovington this weekend or Devizes on the 17/18th July and is prepared to pick up some figs for me from Stonewall and/or RH Models (no online ordering), please let me know.