Last Day for the Kickstarter! We're at 214% of our goal and this is your last day to get a great deal on two new armies! Check out these great WIP (many about 70% done) pictures of the Hura Technocracy and Epsilon Squads including heavy weapons and mechs!

Here are a bunch of WIP pictures of various sculpts.  Remember, many of these will be refined in the coming weeks as well and are missing arms or hands or other details.  The heads have just been placed on to give an idea of what it looks like. 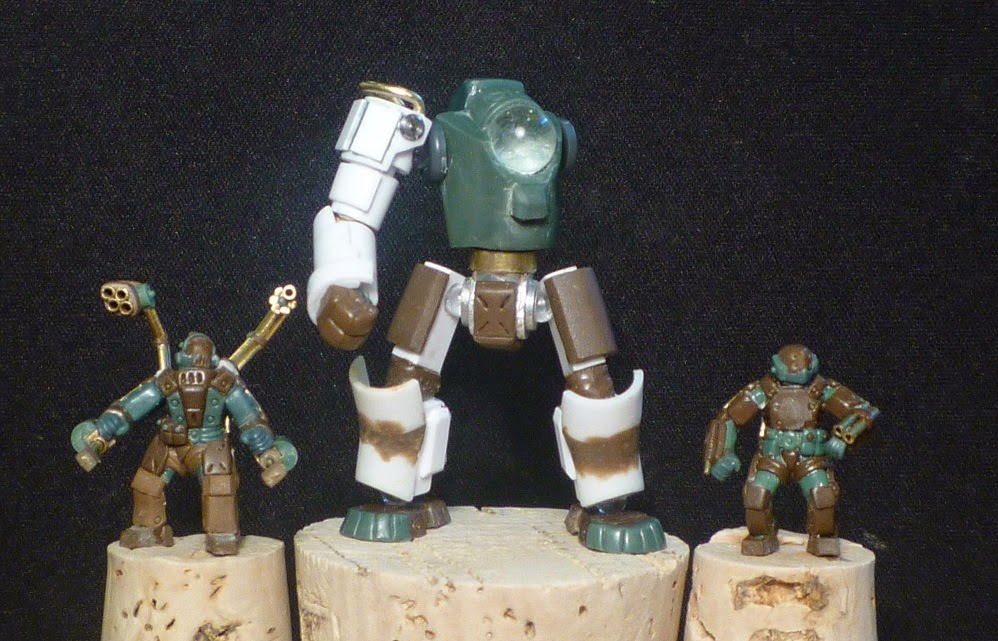 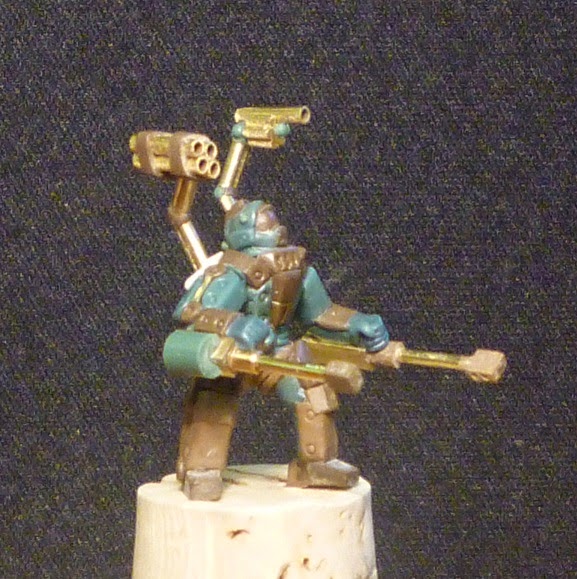 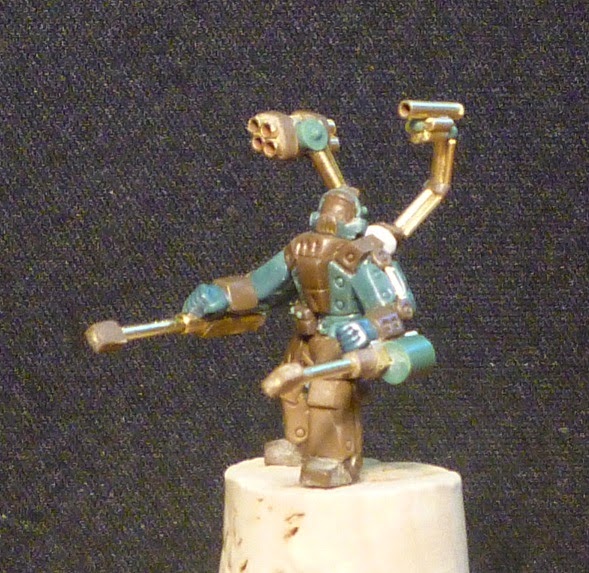 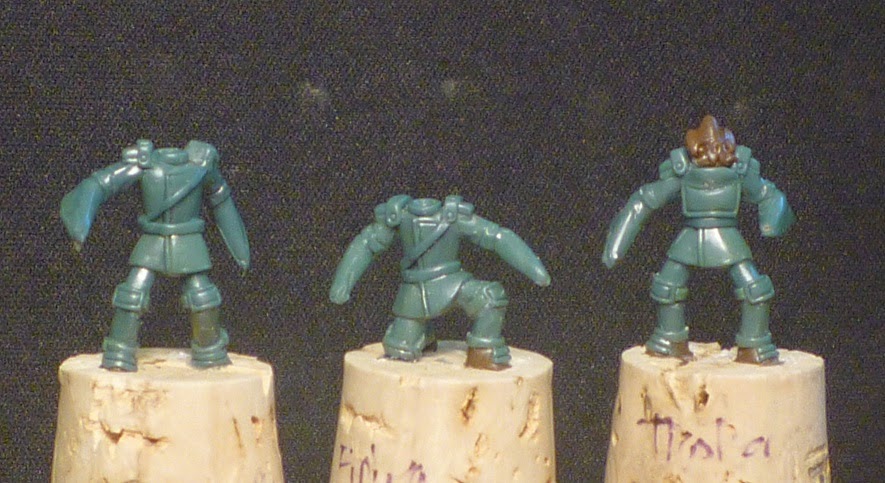 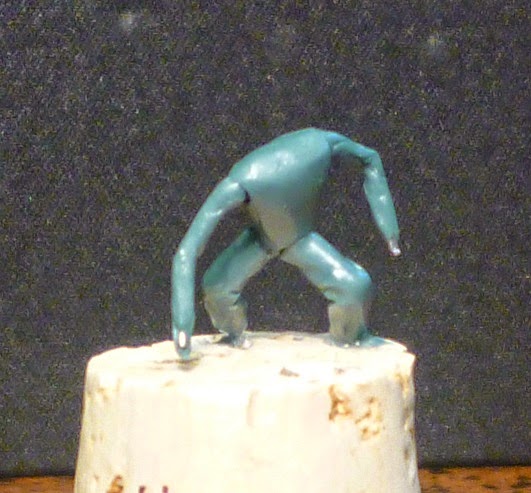 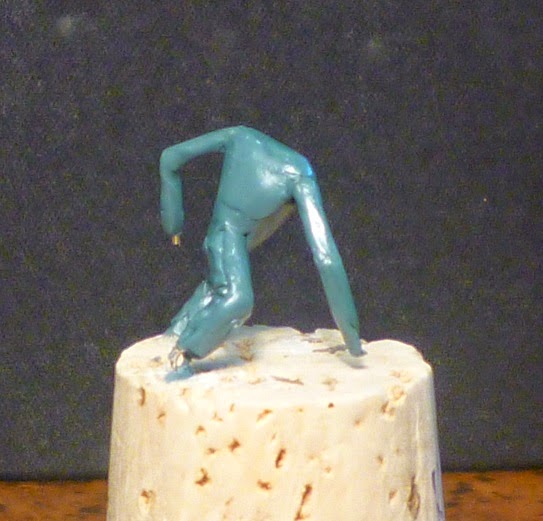 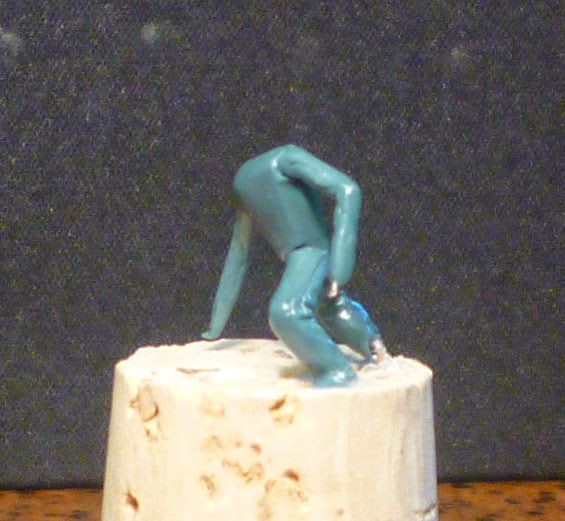 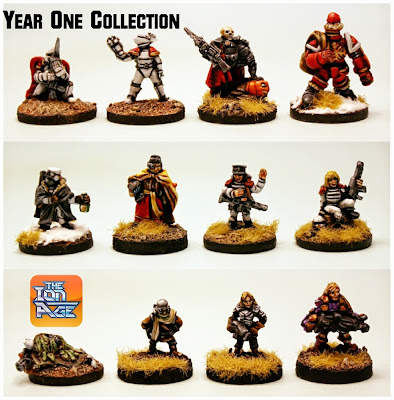 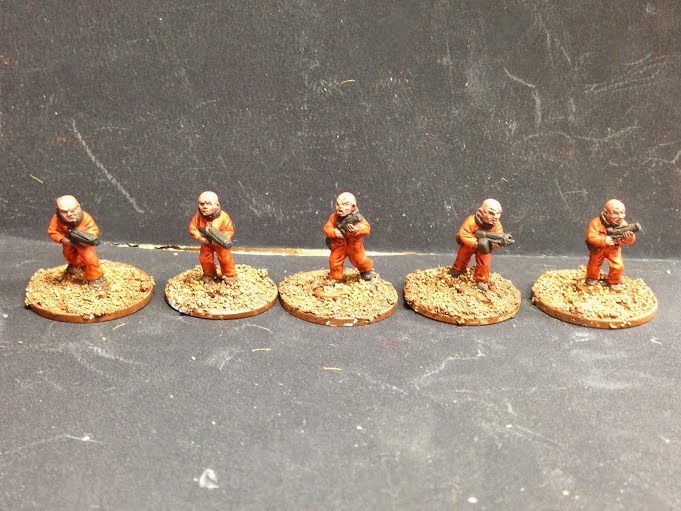 Penal battalion service in infantry roles was the most common use of Prisoners whether they were political prisoners, convicts, P.O.W’s or troops who had failed in previous duties and were viewed by many prisoners as tantamount to a death sentence.

Prisoners sentenced to infantry units were eligible for commutation of sentence and assignment to an Army line unit if they survived their sentence or had accomplished extremely heroic deeds in combat. They could also theoretically receive military decorations for outstanding service and if released were considered fully rehabilitated, though those suspected of political disloyalties remained marked men.

In reality, the promise of rehabilitation was (in most cases) pure propaganda; penal battalions were administered and commanded by the field unit HQ’s, who treated Penal Troops as a worthless subspecies of soldier, useful only for absorbing heavy casualties that would otherwise be inflicted on a more worthy unit.
The penal troopers thus faced little prospect of escape, ensured by the use of explosive neck devices, activated with zero hesitation if so much as the slightest hesitation was shown!

The R.U.S.K and PLA forces both regularly use Penal Forces. With limited firepower and no body armour these troops are also nice for converting to several other troop types.

To launch the new troops, I’ll be offering a preorder special of 10% off all Penal Troopers.  The offer will close in 2 weeks’ time and Items posted within the month.

Ill also be offering new Army pack special of 6 packs of Penal troops and one pack of either Rusk HQ troops or Sino/PLA  HQ.


We have plans to extend the range as well, and are always happy to hear your suggestions!

All packs can be found on ArmiesArmy Shop
Posted by Mr. Harold at Tuesday, July 29, 2014 2 comments:

With all the Stretch Goals unlocked and funding at 192% we enter the last 48 hours for the ClearHorizon Miniatuers 15mm Sci-Fi Miniatures Kickstarter! 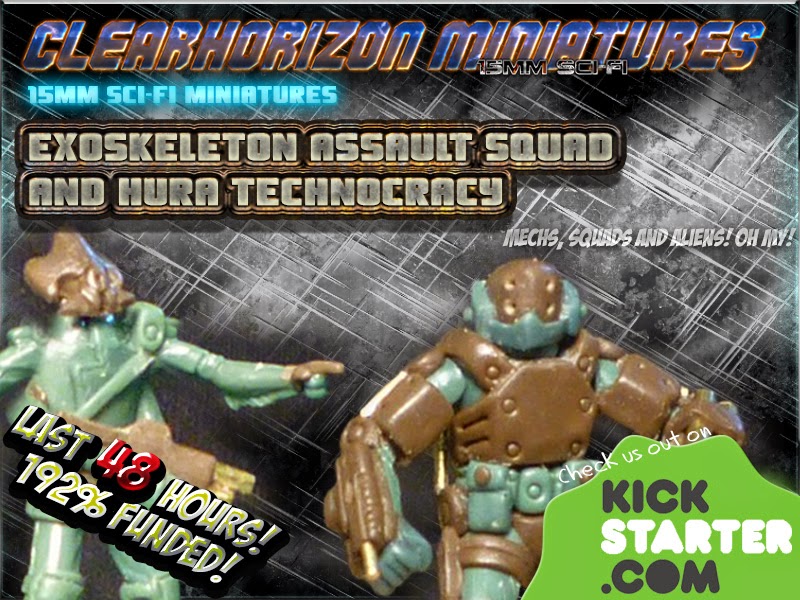 Check out the pledge and add-on options, which include base squads (with command special character sprues), heavy weapon squads and assault mechs!

Pledge today to support a great new range and to get a great deal on a new army!

The folks at Ion Age have popped up with a cool little glimpse of an upcoming terrain item. These Geo Shelters have a really cool futuristic design and will come in several variants, including a damaged one. Early Supporter Offers (ESO) for these new models is scheduled to open up August 7th, so save your space bucks.

15mm.co.uk has brought the last of its vintage Laserburn vehicles back from the past with a resin update. The original Scorpion Air Lander model was a monster in metal that  drooled over in black and white advertisements in Dragon Magazine adverts and on the pegs at the old shops in the area. I never owned one but all of us have a chance to add this impressive Space Opera rig to our collections. 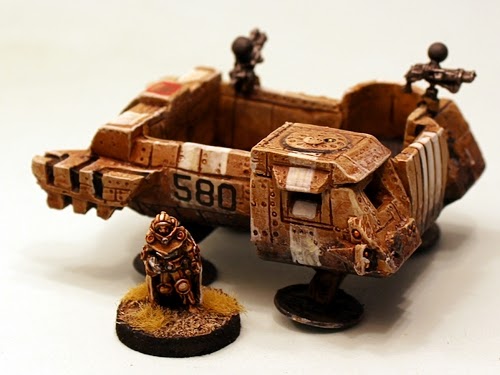 Assault Publishing Announces the release of their newest range!

Today I have the honour of launching Assault Publishing Delightful Selection (APDS) 15 mm miniature range. It is planned to be small, premium line of models which are designed for PMC 2640 wargame. The line starts from two sets: SF Combat Engineers and SF Observers.

The first set is ready-to-field unit for PMC 2640 which consists of 6 unique sculps: Sarge with flamethrower, two soldiers with energy weapons, one with grenade launcher, one with bolt-cutter and one charging with pistol and e-tool.

The second one is Observers set consists of six miniatures in total in 3 patterns: observer in Ghillie suit, drone controller with recon drone and cityfight-style observer. They can be used as part of your command or recon units. But it isn’t all! These Observers were designed to form perfect teams with snipers from O8 – every sniper has the observer in the same style (O8 snipers SF-1516 set is also in Assault Publishing offer).

Please note that Observers picture shows the greens and will be replaced soon.
Both sets can be purchased in Assault Publishing On-line Store only.

Our kickstarter has two weeks to go and is already at 150%! 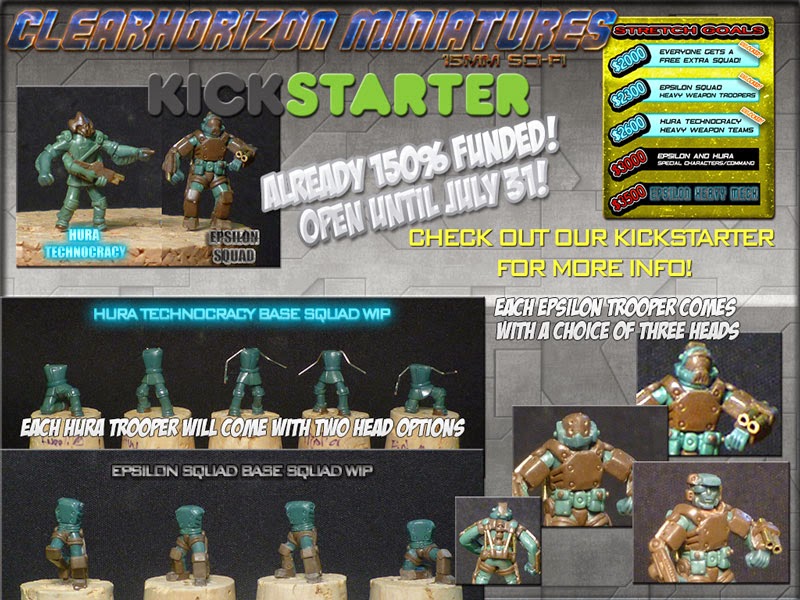 We've already unlocked the first three stretch goals, and only two to go!

Check out our kickstarter for more info:

Thanks for looking!
Posted by Mr. Harold at Thursday, July 17, 2014 No comments:

The Ion Age's wonderful line of Adder Combat Lifters vehicles (IAF036A-D has hit general release. Four variants of the vehicle exist with a fifth model representing a SmashedAdder (IAF038). While created fro the Ion Age universe, these vehicles have enough grit to fit into just about any science fiction battle field.

For full info on these wonderfully detailed vehicles, head over - HERE

And while you are there, do not forget about July's special miniature - Female Adventurer. Like those have come before, this figure will be included free with any order through the end of July and is also available for order for those of you who want more than one.

15mm.co.uk has added to their existing range of figures suitable for wasteland gaming. This time around it's eight new figures representing leader/command types and special weapons/support figures. These figures all have a ragged, desperate look about them that is perfect for many themes from post-apocalyptic survivors, mutant future denizens or even science fiction renegades and scavengers.

New Nox for The Ion Age

As if the Nox weren't cool enough in their last release, these new, upgunned Nox just blow me away. IAF052 are armed with plasma rifles, they come in five different poses and make quite the menacing unit on the battlefield. They are available in a pack of five or in single poses and there are special discounts for purchasing multiple packs. For more info, read - HERE

And while we are at it, don't forget July's special miniature...

Hi everyone! We have an update for the ClearHorizon Miniatures 15mm Sci-Fi Kickstarter.  The sculptor has started on the remaining poses for the Epsilon Exoskeleton armored Human combat squad.

Here are remaining poses for the Epsilon Squads:

Also, these will also all have a choice of three separate heads. 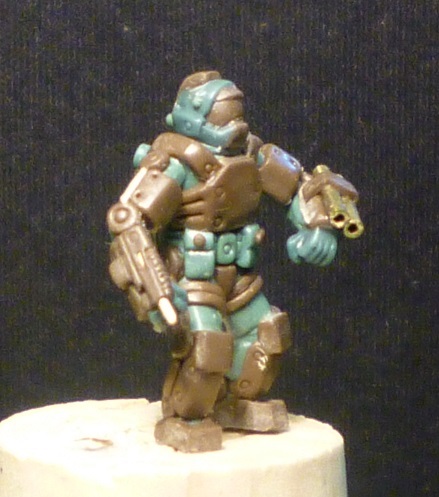 If we get up to $2000 everyone gets an extra squad for free and the remaining stretch goals allow us to produce heavy weapon squads and some more surprises as well!