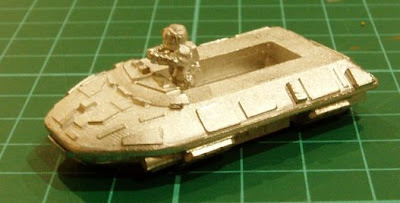 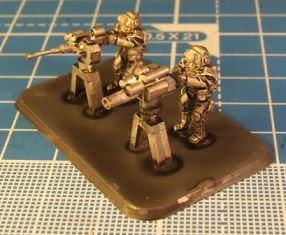 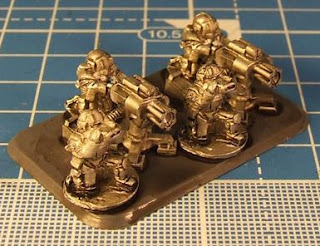 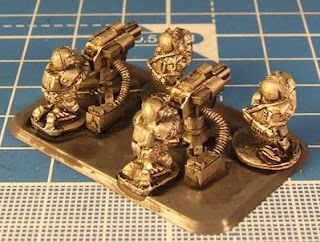 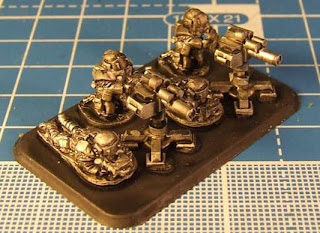 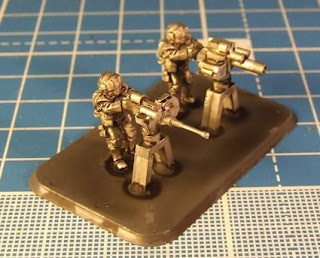 .
You are going to love this little model.! Also available this week from GZG are Tracked GunBots. These fit the bill perfectly for modern day or near future robotics and have a certain 'Terminator' T100 charm to them. 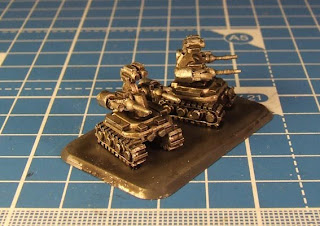 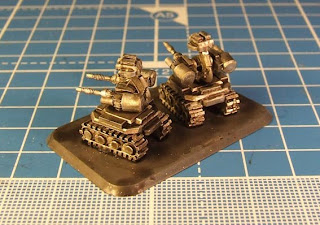 V15-68A GunBots (tracked) - rear (pack of 2) £2.50
The GunBots will provide perfect support for 15mm.co.uk's Automatons or become the 'soldiers' of a low tech mechanoid army in their own right. Need to storm a spaceship or space station? Send your GunBots out ahead. Lot's of great options with these models. Nice one Jon!
Available from:
WWW.GROUNDZEROGAMES.NET 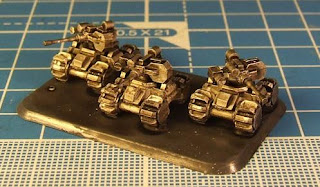 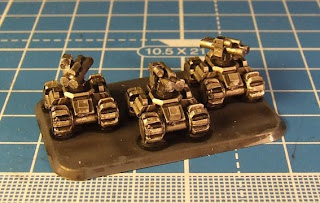 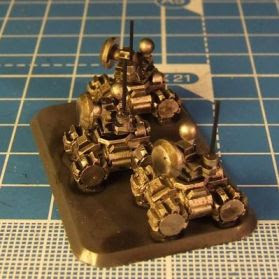 IN THE PIPE... GZG New Israelis - ALL NEW SCULPTS 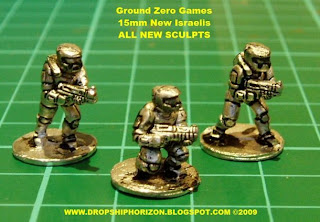 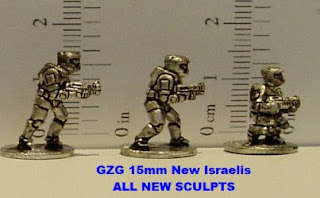 More pics & details to follow
I don't NEED 10 packs of guys with an arm moved here, a foot moved there, or captured mid pose out walking the dog. 3 minis will do, just three, like those above. Three minis who look like they are in combat. Three minis when placed together on a base tell a coherent story.

.
Jon has pulled a magnificent blinder as a result of this thread on TMP (click here). Here are two prototype 15mm mini aerial drones from GZG together with a metal 'flight' stand. 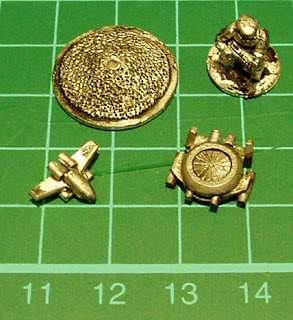 GZG 15mm Aerial Mini-Drones
(note: 1cm squares)
The fan/rotor on the GRAW style drone (right) is sculpted underneath as well! These will be very useful in the forthcoming TOMORROWS WAR Ambush Alley Games' Force on Force variant.

.
I am really pleased to be able to preview these two new sets of 15mm Sci Fi miniatures from Rebel Minis. My thanks to Mike for providing the intel!

First up 15mm Sci Fi Infiltrators. Six unique Ultra-Tech Nano-Suit infantry, special forces or operators. I believe they will be packaged as 21 assorted miniatures for $10.95. 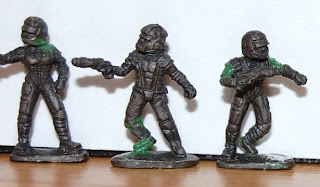 Mike hopes to be receiving stock of the Infiltrators next week. Keep an eye on Rebel Minis website for updates. 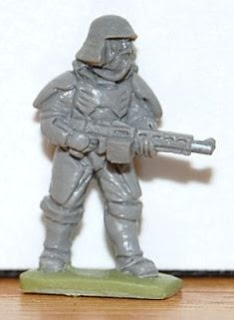 There's something retro Sci Fi, WWW2 or even post apocalyptic about this Titan Marine miniature. I'm looking forward to seeing the complete range.

For more details and availability, check out:

.
I've always liked the look of Rebel Minis origina 15mm Sci Fil Grav Tanks. Mike has emailed me today to let me know that they have been remastered. The Thunder, Thumper and Warlord are now more substantial models and even better, come in at a lower price of $9.95 each. 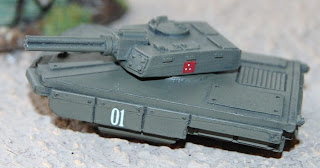 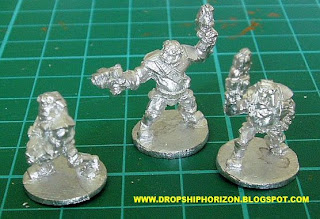 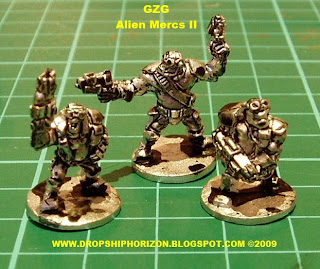 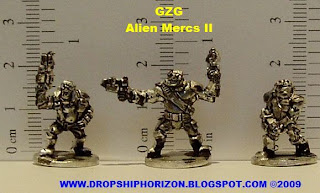 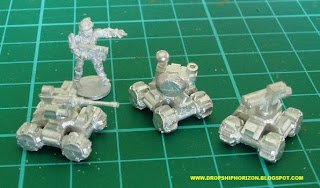 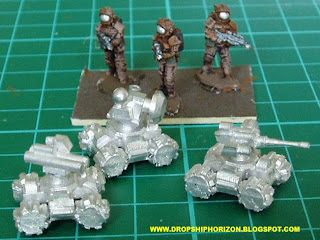 Heads Up Marines! We're expecting massive reinforcements over the next two weeks in the shape of new 15mm Sci Fi recruits from GZG, Khurasan Miniatures and Rebel Minis space commands.

First teaser shots of the new guys will appear in stages this weekend. So keep this channel open! 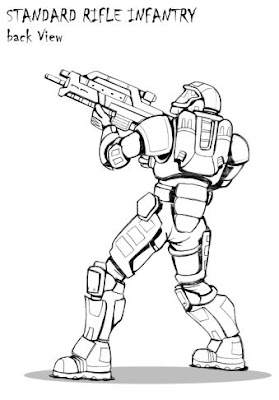 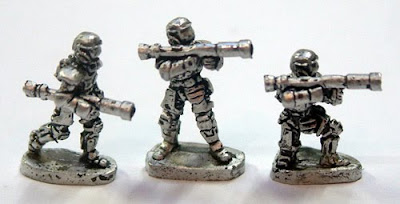 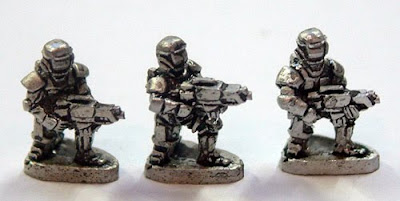 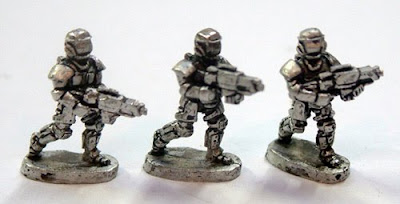 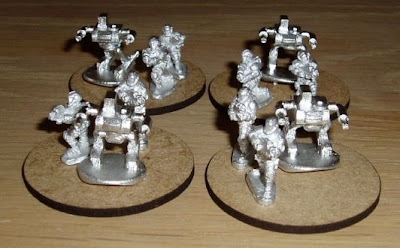 .
Craig at Critical Mass Games has sent over these WIPs of the forthcoming 15mm Sci Fi Protolene Hunters. What can I say?

Finished off the Augmented Battle Suit platoon from Critical Mass Games this morning. Mounted the minis individually on 15mm round bases for Space corridor guncrawls and 1-2-1 Character Skirmish games. Plus, Space Hulk is back with a vengeance and I have the original rules, got tiles and lot's of Khurasan's Space Demons.......

PAINTING & FINISHING
I painted the figures using the 'speed painting' technique introduced by the Master Chef. Each figure was washed and scrubbed to buff up the metal before painting with 2 coats of Citadel Thrakka Green Wash. This was applied straight onto the bare metal. The weapon was painted black and the visor gold, then the entire model was drybrushed with Citadel Bolt Gun Metal. This picked out the highlights and edges of the armour and gave them a distinctly 'worn, been in combat far too long' look. Brilliant!

The washes took longer to dry than normal. Possibly due to the humidity in the air. Nevertheless, putting aside the drying breaks, I can claim completing these miniatures to a stunning tabletop quality in under half an hour, including the bases, no more than an hour of 'hands on' time.

TIP
Where the brusg=h had accidentally slipped or applied too much gold around the visor, I used an old pot of OOP Citadel Salamander Green to rectify the mistake. I found it compliments Thrakka Green perfectly and now aim to use Salamander Green to provide greater depth to 'shadow' areas or line specific detail if needed on future projects of this nature, prior to applying the Thrakka Green.

PAINTING FOR THE MASTER CHEF
With my own platoon of miniatures out of the way, I painted the remaining Augmented Battle Suit figs to give to the Master Chef. He only wants a handful , including one to be the Master Chef, of course! He might as well have my redundant figs and use the cash to buy himself more CMG Light Recon or Standard Rifle Infantry.

I handled the 'Battle Suits' destined for the Master Chef slightly differently than mine. I began with one coat of Thrakka Green Wash but then followed with a coat of OOP Citadel Waaagh (or, as Heather called it "Oh my god that's vivid!" ) Green Ink.

I went for the Waaagh Green 'cause that's what MC prefers for his own miniatures and it'll allow him to repair any future damage to the paint job easily. The first coat was Thrakka Green to 'key' the model prior to applying the ink. Once drybrushed with Bolt Gun Metal, the tone of the green was subdued so that the overall effect actually looks really good.

(Photos will follow once I have my camera's USB port
problems sorted or buy a digital card reader.)