This just stolen from the Ground Zero Games webstore:


"Our SUMMER SALE is now on! The SALE will run until Midnight (UK time) on MONDAY 9th of July, so you have just over 11 days to get your orders in. For the duration of the sale, ALL ITEMS ON THE STORE ARE AT 15% OFF NORMAL LIST PRICES."


Thanks to Chief Lackey Rich for spotting this and posting about it on TMP.
Posted by David at Thursday, June 28, 2012 1 comment:

The Critical Mass boys have suffered from some moulds going adrift in the post. This is a double shame as 1) the moulds were for the Mercenary Mecha and 2) they came from the Forge Hall of John Bear Ross.

While efforts are being made to sort out this SNAFU, Critical Mass Games is pressing ahead with a Mid-Summer Madness Sale – 20% off everything from now until 22 July 2012. Along with this good news, comes the announcement that the Tamaska/Fenrir Heavy Walker is now available again, in a slightly remodelled form, to support the Protolene Khanate forces.

Meanwhile, over at 15mm.co.uk, a Cultist Command group is now available – either as a set or as individual figures – to provide some organisational oomph to your Gas lit Followers of the Elder Ones, Post-Apocalypse Survivalists or Science Fiction Spiritual Warriors.

Also new out from 15mm.co.uk, either as a pack of ten or individually, are the Arid World Warriors. Wearing robes and with their faces concealed by a wrap of their turbans, these figures could serve as desert allies or enemies from contemporary times on into the far future.


As usual, I have re-purposed images from the websites of Critical Mass Games and 15mm.co.uk to illustrate this news item. Go visit their websites if you like what you see.


Daemonscape Dropships
I took a punt on a little company called Daemonscape.

I have a nice little Dropship model, the ZHI-111 Chinese Assault Lander by Combat Wombat, and I am very pleased with it. But, in reality, it is only really large enough to hold a squad of guys, and you can’t get a vehicle inside it.

I had heard that Terry from Daemonscape had taken on Ground Zero Games’ resin moulds a little while ago when GZG Jon decided to get out of resin. Then on TMP, I saw a photo of the GZG56 Dropship – one of these models. Originally a 25/28mm scale model, the poster, Felonmarmer had inverted the command deck by accident and turned the ship into a 15mm scale model.

Some time passed and then while noodling around on the interweb, I investigated Daemonscape’s website and found Terry’s 6mm model range. I picked up a MT28 Big Rig (the flying brick) and a MT32 Buffalo Troop transport (and a set of 25mm scale cargo containers). Terry’s service and communication were great and my models arrived, very well packed, this week.


Both the Big Rig and the Buffalo work surprisingly well in 15mm, much to my relief – the cockpit windows appear to be about the size one would expect on a modern jet airliner. The Buffalo is about the size of the ZHI-111 Assault Lander from Combat Wombat and works as an infantry lander or a civilian shuttle. The Big Rig would carry two Critical Mass Games Kaamados Gekotaa Aromoured Cars, or similar sized vehicles, as well was a squad of infantry, or a platoon of squaddies and their kit.

As you can see from these photos, the Buffalo is a lovely little lander, while the Big Rig is a great big brute, even if the hull is actually hollow. I blue-tacced the Big Rig together for these shots and, while Terry has sanded the parts very nicely, I will need to do a little filling to get the best finish on the ship.

And, yes, perhaps I could have built a Big Rig myself, but the likelihood is that I would have never completed it. This way, I have a well-cast, sturdy model which I only have to paint. And Avamango’s recommendation of CorSec Engineering’s heavy duty flight stand for this model gives me the option of depicting it in flight as well.

The cargo containers, which I didn’t take a picture of, are 28mm wide x 28mm high. The small one is 28mm long, a cube; the middle-sized one is 57mm long; while the large one is 88mm long. Against a 15mm figure, they look very much like proper containers and the large one could almost be a portacom with the addition of a door and windows.

Reduced Zombies
Now, some of you are probably aware that Zombiesmith is currently having a 15% off sale. This runs until the end of June and could be just opportunity to pick up those 15mm Quar that everyone is always saying they “really must get to use as low tech troops”. In July, unfortunately, reality bites and both figure prices and postage will increase, so get in early as post-June moaners will be ignored.

Broadside 2012
And a final reminder for our UK friends that Broadside 2012 is on this Sunday 10 June in Sittingbourne, Kent, England. The Blogging community has picked up the standard for getting the word out about this show after the organisers were rather badly let down by two of the three major UK Wargames magazines.

For Science Fiction gamers, Brigade Models, MJ Figures, Ainsty Castings, and Mongoose Publishing will be attending, along with up to 32 other traders, 14 clubs and 26 games – I assume demo or participation games – which sounds like pretty good value for a 3 quid entry fee. If anyone would like to send in photos, we’ll post the best ones. If you do want to send in a photo, using an image manipulation programme to reduce its size to a maximum width or height of 500 pixels is a big help. 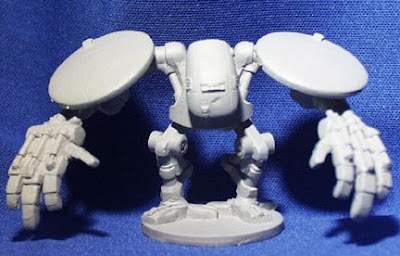 A little late in getting this out, but still worth mentioning. Mega Minis has release their lovely Demo Bot in 15mm. A faithful reproduction of the original 28mm version, this robot would make a fine addition to any science fiction board.

It comes with an assortment of arm options so that you can weaponize it or field it as a simple utility bot. 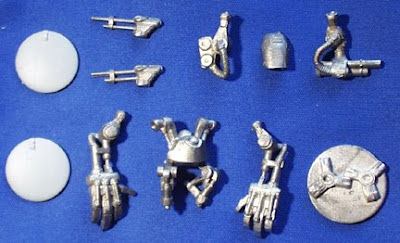 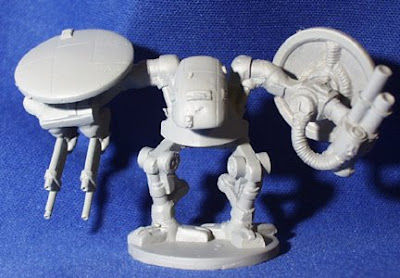 If you are a multi-scale gamer, fear not as this gigantic bot is perfectly suitable for use with your 28mm minis as shown below. 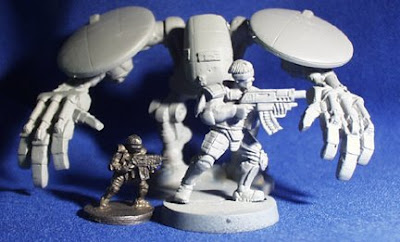 Another Sale, some Mercenary Armour, and some Elder Things


Another Sale - this time from RAFM

In a thread on TMP, Chief Lackey Rich pointed out that RAFM have just announced a 25% off sale.

Initially I wasn't able to find anything about this sale on the RAFM website and was wondering if I had misread Rich's post, until I realised that I needed to refresh my favourites list. That done, all was revealed on the RAFM homepage.

Over on the Critical Mass Games Website, I see that CMG has released the next group of vehicles for the Mercenaries Range – the Bastion IFV and the Havoc Tank. These are available in either tracked or grav configurations and look very nice, workman-like vehicles. Dale has worked his resin magic again – as can be seen in the photo to right - producing a downed Prasentia Guardian drone as an objective marker.

And if you happen to be in the St Helens area, just out of Liverpool, England, on Saturday 16 June, you should check out the Phalanx 2012 show hosted by the St Helen’s and Ashton Wargames Society. Critical Mass Games have been confirmed as attending, and also on the card are Ainsty Castings, Fighting 15’s, Irregular Miniatures, and Pendraken, as well as S & A Scenics, amongst many others.

Elder Things
Finally, a couple of weeks ago a gentleman, using the handle Roebeast, posted on The Miniatures Page that he had just released the next items in his growing line of 15mm Cthulu mythos-inspired miniatures. I liked the look of the Elder Things, so I ordered a couple of packs from Roebeast’s Magical House of Sunshine. Roebeast’s customer service is excellent – I was informed when my order was being filled and when it had been dispatched – and delivery was very prompt.

The Elder Things are lovely models, standing 22 – 25mm tall. Assembly was relatively straight forward; though I’m glad I read Roebeast’s Elder Thing assembly instructions first. By bending the limb-flipper-things prior to sticking them onto the torso, I was able to get a nice, individualist feel to each of the models.

I’m not a huge Cthulu fan, but I really like these alien aliens – I’m thinking of using them as a methane-breathing race in my Traveller campaign – and I see today that Elder Things with Disruptor weapons will be available soon. I’ll be keeping an eye out for these (probably at the risk of my SAN).