Two different squads available at Khurasan Miniatures for $5.99 each.


Vitros are human clone soldiers who are organised into platoons and then attached to Federal divisions at the company level as needed before or during battle.  They are folded into the company’s command structure, usually one platoon being added to bolster the company.


Vitros are bred in large processing facilities, genetically modified so that they reach adulthood in two years.  This rapid growth comes at a price -- they begin to age beyond optimal combat service at about age 18 and usually reach mortality at about age 22.  (Vitro age is measured starting with separation from the development chamber.) As they do not have parents they bond instead with their instructors, who teach them combat methods and some basic interpersonal skills so that they can cooperate with their in utero fellow soldiers.


Vitros have been bred by the Federation as soldiers for over three centuries but the programme was only put into full effect during the First Pelagic War, due to the dire need for soldiers at the time.  Since then the moral implications have been trumped by continuing combat demands, but there is still an active anti-Vitro political movement, particularly at the Federal Core, the outlying systems being more in favour of the military cloning programme.


Vitros are the best infantry in the Federal Army – they have enhanced senses and are physically superior to in uteros, and are trained for combat virtually from the day they separate.  They are provided with distinctive armour and weapons to take advantage of their exceptional performance (and to clearly indicate that they are Vitros), the most unusual feature being the multi-lens combat helmet which gives the Vitro warrior a somewhat strange, alien appearance.  They are raised to obey and often do, but they are human, and as such have their grievances.  Vitros keenly feel their shortened lifespans, and the disdain many in uteros have for them as products rather than people.  There are also persistent rumours that Vitro Programme scientists have developed a serum to counteract the accelerated Vitro aging process but do not provide this to Vitros because it decreases combat capabilities.  As a result of these factors, and other issues besides, there have been sporadic Vitro uprisings.   This is the reason Vitros are no longer organized into formations larger than infantry platoons – the heavier weapons remain under control of in utero units.


Vitros are genetically human but their hair follicles do not grow hair unless artificially stimulated and both genders are sterile although they can be sexually active.  Both males and females serve in Vitro platoons in about equal numbers.  Occasionally, an especially aggrieved Vitro will escape the facility and go renegade, and these Vitros are especially dangerous – they will sometimes join bands of alien mercenaries, but just as often will attempt to pass as an in utero to infiltrate the Vitro Programme to seek out the rumoured life enhancement serum.


Two infantry squads of Vitros are now available at our webstore – they were sculpted by PF.

Warfighter Epoch is the new release from Flytrap Factory. Presenting and array of futuristic fighters and walking warmachines, this is a grand project that is coming out of the gates strong. The sculptor has paid incredible attention to detail and animation and has given us some very nice pieces.

Check out there site for more details - http://www.flytrapfactory.com/home.html

There are a ton of different options, and the pieces even have indents for magnets, so you can configure them till you go crazy!

I have some of their other terrain, and their quality is top notch.  If you're looking for colony buildings, or even to build a research base for the zombie apocalypse, check these out!

These are the sets, and you can also buy the parts individually.
Posted by Mr. Harold at Sunday, April 27, 2014 3 comments:

Hi everyone, today I review modern tents by 15mm.co.uk.  A really cool set of terrain usable for all types of genres.

Like most of you, I read about the All Quiet on the Martian Front (AQotMF) Kickstarter back in the day. While I recognized the "H. G. Wells' War of the Worlds Miniatures Game" as a good idea, I've never been a big fan of retro sci fi, VSF and the like... Until a few weeks ago when, with the models release getting closer (the KS should be shipping next month and the rest of us can pre-order them since yesterday) a comment by JBR on TMP (too many TLA?) got me looking back at some of the model. He was eagerly looking forward to the plastic US tanks that he qualified as great conversion fodder for 15mm not-40K Imperial Guard...

Anton over on the Facebook 15mm Sci-Fi group (Join today!) has previewed these awesome upcoming releases:

Going up in the Flytrap Factory webshop over the next day! "Warfighter Epoch" cometh! I'll let you know the minute it's LIVE!

Can't wait for these to come out!

Darkest Star Games have updated their (funded) kickstarter with two previews of the stretch goal infantry:

Ground Zero Games new releases up on the web store.

The Ground Zero Games new releases from the Salute show have been put up on their website.

It's quite a nice selection too!

Two Hour Wargames has a (successfully funded) kickstarter going on right now with 13 days left to go.  It is for a supplement to All Things Zombie and new miniatures from Rebel Minis.


Rebel Mike on TMP posted this:

Whoo Hoo! Ed has added some new Stretch goals to the Hospital 911 Kickstarter! Here are some of them! 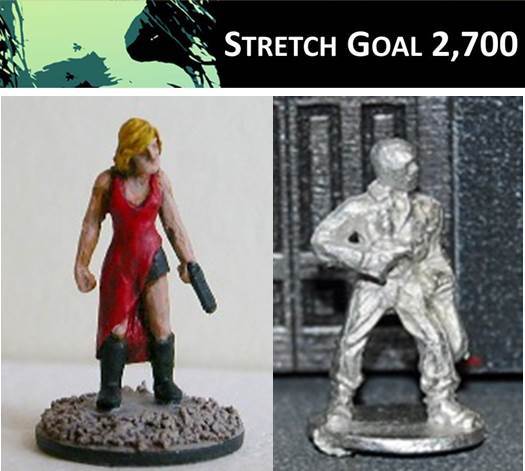 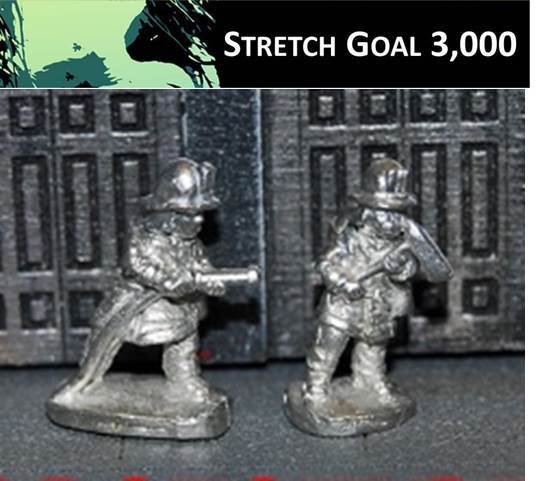 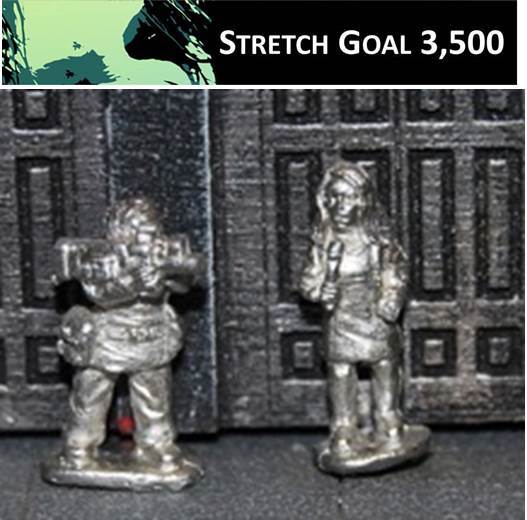 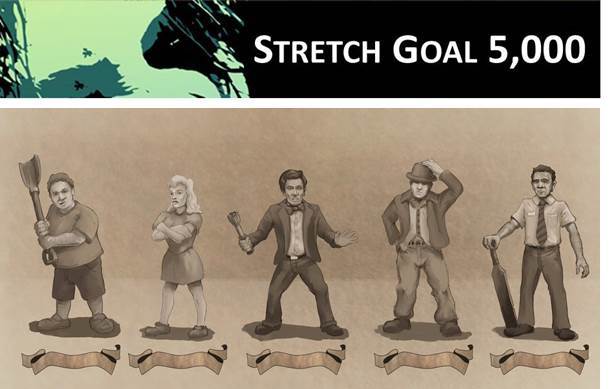 Take a look at the Kickstarter for new Floor plans as well!
link
and don't forget to share and spread the word!
Thanks!
RebelMike
Rebelminis.com

As the graphic below shows, we have been invaded by a slew of new Malig codes. There really isn't enough room to go into detail on all of the individual codes but as you can see the variety represented in this tidal wave of miniatures goodness is impressive.

For complete information and all the cool little details, head - HERE 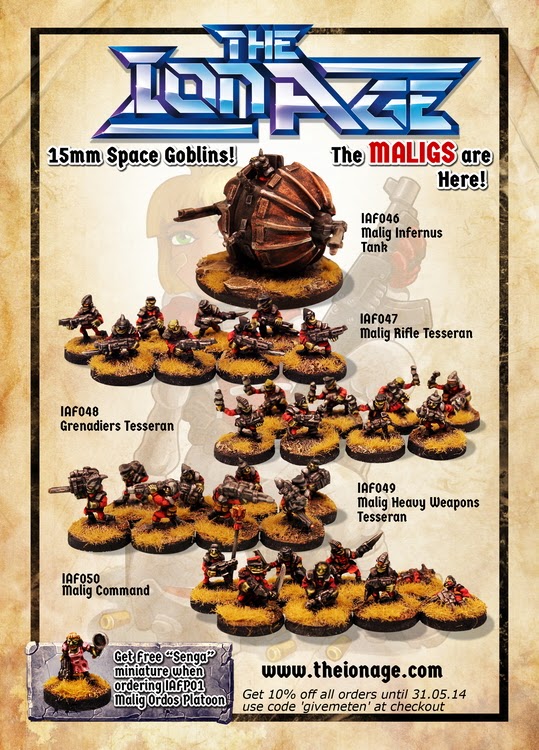 Bringing Sci-Fi gaming to the roleplaying masses. An after action report of the Big Game 12.9
For a number of years my local gaming club (TableTopNorth) in Belfast has allowed me to run participation figures wargames events.  These have become known as the Big Games.  On Saturday the 5th of April I had the privilege of running the latest Big Game.

With Fireteam Andromeda being my favoured set of sci-fi rules I wanted to use them.  At first I was baffled as to how to do it.  The heart of Fireteam Andromeda is the unique and incredibly subtle command and control mechanism which allows units already activated to take extra commands, known as active commands.  In various other circumstances units can make reactive commands.  I knew most of players would not be regular figure gamers and this would confuse them so reluctantly this mechanic had to go.  Instead in each activation phase each player would be allowed to activate one unit and take it through the four potential actions.  Regrouping to recover from morale or damage effects, moving, shooting (or running for infantry and mechs) and assaulting if desired for units that did not run.  Each unit in the game would have it's own unit card giving all the required stats for the player controlling it.

The folks at 15mm.co.uk introduced this beauty of a defence tower at Salute and now it is available for general purchase.

Available in packs of one or three, this kit is a combined metal and resin kit and will make the perfect weapons post for any fortress, trench or other perimeter. This kit looks crisp and effective and I cannot wait to put several on the table.
Posted by Eli Arndt at Thursday, April 17, 2014 No comments:

After their initial releases of some really cool 15mm science fiction miniatures and vehicle models, Darkest Star has decided to run a Kickstarter campaign to help push out some of their other projects. This campaign starts with a good amount of the up front work finished for some of the core project goals and offers a couple of nice stretch and add-on goals. 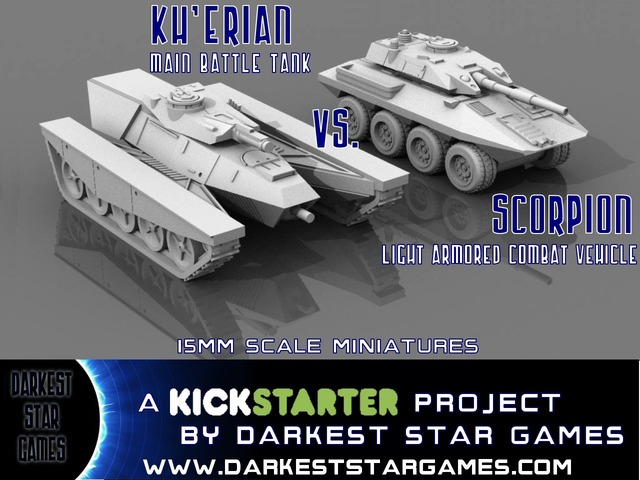 As you can see, in the images below, the first vehicle, "Scorpion", in this campaign is ready to go. It has been rendered, printed, even has optional parts ready and laid out. The second vehicle, "Kh'erian/Kh'erisan",  in the core campaign has also been finished in the 3D rendering stage. The campaign also includes stretch goals for additional vehicles, infantry and even new factions. There are add-ons associated with the stretch goals as well as drawing from Darkest star's existing range of 15mm science fiction models. 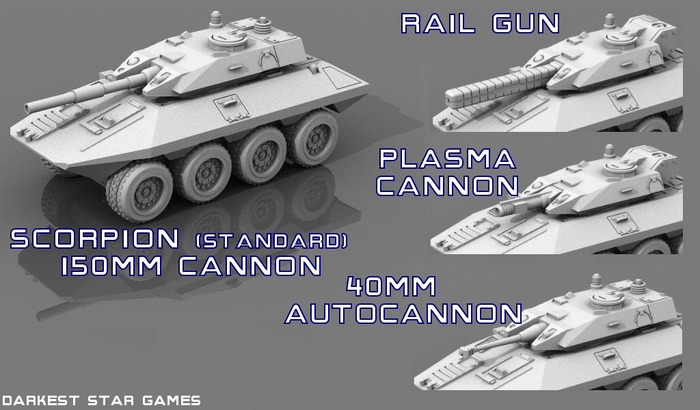 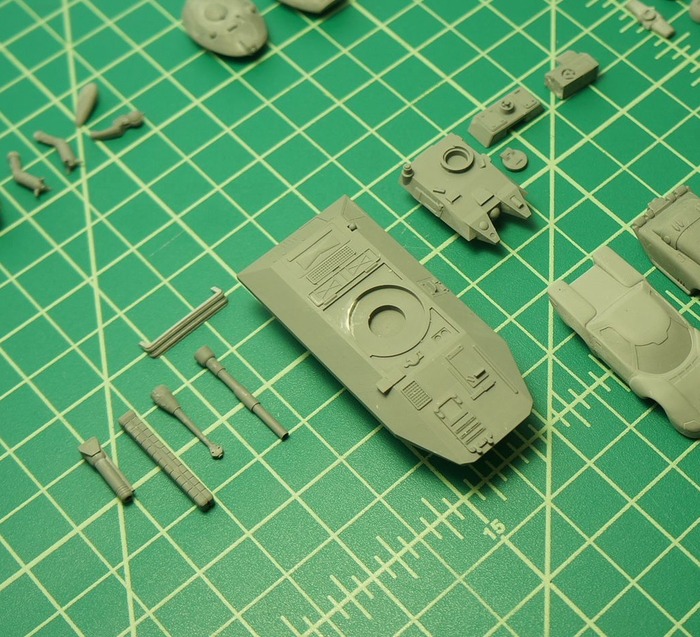 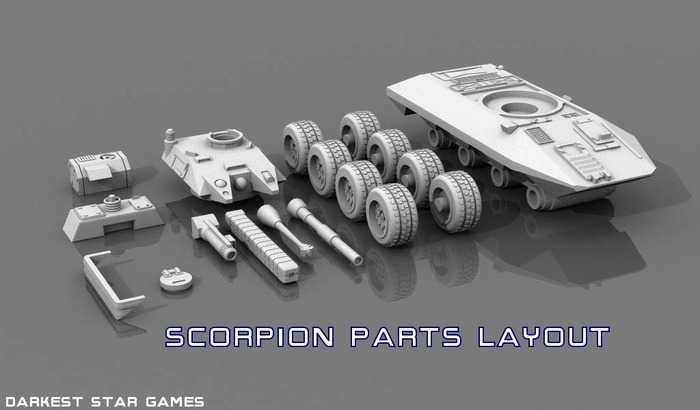 Who in 15mm Science Fiction is Going to Salute?

With many of our readers and many of the major contributors to the 15mm science fiction hobby being in the UK, I thought it might be worth it to do a round of up of manufacturers who are planning to go to Salute 2014. While this list will, by no means, be comprehensive, it will include most of the folks I know off hand and those who I was able to track down online. On that note, feel free to include others I might over look in the comments and I'll add them to the post until the weekend of the convention.

[TB07] Alternative Armies will be on hand, presenting the Ion Age ranges as well as the new releases from 15mm.co.uk's science fiction ranges and Loud Ninja Games.

[TB26] Brigade Models has been updating their 15mm line this past year and continues to do so into 2014. They have several new releases scheduled to be on hand with the rest of their line.

[GK03] Critical Mass Games will be on hand with a number of new releases and their stock of amazing science fiction 15mm miniatures, vehicles and terrain.

[TK22] Ainsty Castings has rolled out their revised Hammers Slammers vehicles and will also have the rules and their awesome lines of figures and terrain on hand. 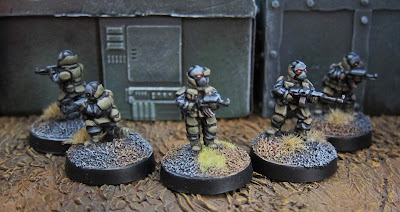 [TN18] Black Hat Miniatures is a producer of quite and extensive line of miniatures, with some choice 15mm science fiction miniatures, including the Armies Army range by the incredibly nice Keith Armstrong.

[TK12] Ground Zero Games will be on hand with their monstrous range. Everything from classic GZG, to the newer releases, including the range done in partnership with Ambush Alley Games for their Tomorrow's War game universe.