It is the high summer Bank Holiday Weekend here in the UK and in celebration of a short holiday in the sun the three pillars of wargaming excellence called Alternative Armies, 15mm.co.uk and The Ion Age are having a free postage on all orders event! Four days of free postage fun!

From now until 9am GMT Tuesday 30th August 2016 we are having a free worldwide postage on all orders over 10.00GBP in product value! This applies to our three websites and all our 6mm, 15mm and 28mm miniatures and game systems in fact everything on our websites you can put in your cart (not downloads). All you need to do is add to the cart and the website will do the rest. Click on the links to go to each site. As many orders as you like to anywhere in the world. Remember that any special offers that are currently running are included in this promotion. 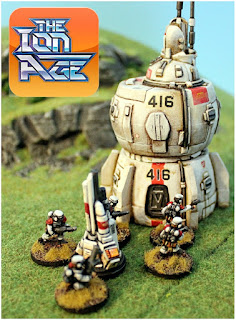 Space Opera science fiction wargamers should look to the unique range and setting of The Ion Age for excellent 15mm and 28mm miniatures, vehicles and rule systems. Here www.theionage.com

Our three websites are having a free postage event. If you place an order for more then ten pounds (10.00GBP) the shopping cart will automatically give you free shipping worldwide. While the vast majority of wargamers are happy to place orders in this way we know that some of you would like to place a combined order by email and receive a paypal invoice to pay. This is totally fine with us and here is what to do for a combined order by email. Firstly choose your point of contact. Is it 15mm.co.uk or The Ion Age? Choose one and email us on sales@15mm.co.uk or info@theionage.com. Make your email title 'combined order' and give us your name, your shipping address, your paypal email address and a list of codes and quantities that you want to order from across our ranges. We will then reply with a total and a paypal invoice. You will get a free monthly miniature if you have Ion Age codes and you will get any other items offered free if applicable from the other websites if you have codes from its ranges in your order. We typically reply quickly but be assured you WILL NOT miss the free postage on your combined order as we will honour it as long as your email comes in to us before the offer ends.

Thanks and enjoy the event!


Brigade Models has been hard at work with the Imperial Skies Kickstarter but as things are coming back to normalcy they have released a few wonderful bits for 15mm science fiction.

The release is a set of outbuildings for their Advanced Buildings. These are perfect for small habs, workshops, sheds or other light utility structures. The second set is a bunch of "widgets" for use on the tops of the Desert Buildings, though I see no reason they wouldn't work on other structures. If you are like me, you love these sorts of add-ons for your own scratch built terrain.

Year Three Begins! Now that our third year of The Ion Age is at a close its time to release the twelve monthly free miniatures as set which can be bought as a set or as singles. From September 2015 to August 2016 each of the IMF 15mm scale code monthly free were given away with all orders month by month. So if you missed any or want more just check out the Year Three Collection now. Its been added to a new page that also has the Year One Collection, the Year Two Collection and others things upon it as well as the current month's free miniature keeping the 'years collections' all in one place. Go HERE or read on. 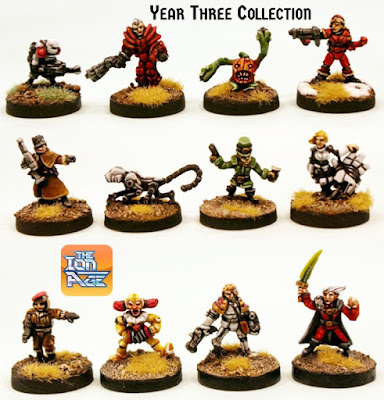 It has been a fun and challenging year for the tiny team that brings you The Ion Age (almost everything you see is myself and the awesome Sam Croes along with input from a few other designers such as Bob Naismith). I am always grinning when working on this universe and the emails and comments of wargamers keep on telling me that we are doing the right things. A small team here in Scotland that works hard following its own path for a massive vision of a far future space opera setting. All of the money you spend with us creates honestly priced new miniatures from a team that loves wargaming. That now said the 15mm range has over three hundred different sculpts spread across Retained, Desteria, Muster and Planetary Militia along with Shia Khan Legion, Nox, Pioneers, Maligs and Nox and more including the Prang and Ion Age civilians too. We have about forty different vehicles and a range of buildings with two dozen different pieces. We have Patrol Angis and Callsign Taranis too as our books. We will keep on getting better!

So what is the Year Three Collection? You can see it HERE. Here is a list of the miniatures by month in this collection:

Each miniature is 0.60GBP or the whole set for 7.00GBP or you can purchase three sets and save 10% by selecting that option on the drop down product menu. That is a very diverse collection of characters and fun 15mm miniatures. Year Four will be full of promise and fun and the first miniatures which will become IMP37 to IMP40 are already designed...you will love them!

As it is our birthday month we have a great offer for you until month's end. The IAF028 Khamel Tracked Bike set is 25% off the pack of three miniatures (Bike with Rider, Bike alone and Rider on foot) and there is 25% off the Bike with Rider on its own for those wanting to build a big force! As well as this we have recently committed to new molds for this code and when we did we added in a third weapon mount option! Every bike supplied now comes with one of the following: A Moth Type 12, a Ron 32mm and now a Minstrel Taser too! You can read the original release article on the blog HERE. You need do nothing but add to your cart the special prices and new weapon is already there.

Launching imminently!
SLAP miniatures have advised that they will be launching another Kickstarter following their successful Global Defence Force campaign. 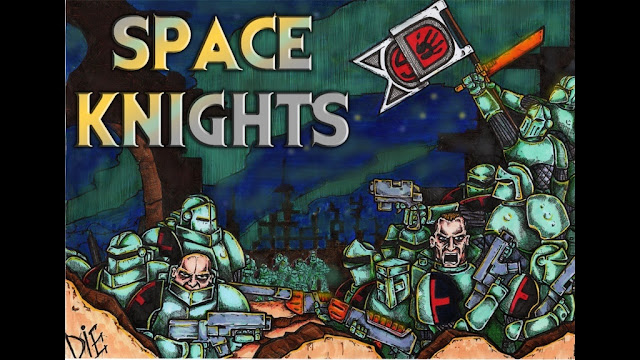 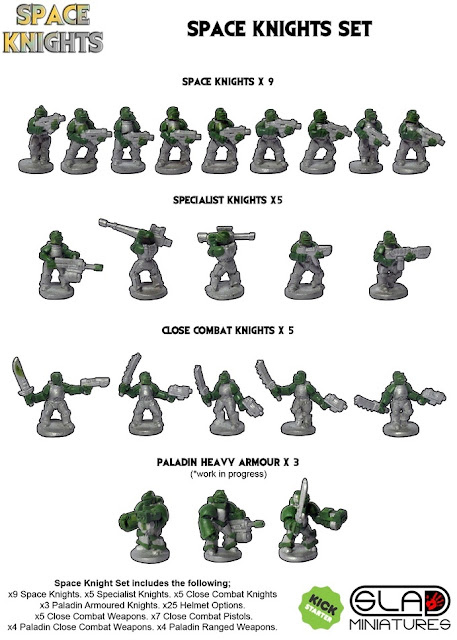 The miniatures come with seperate heads and, in some cases, separate arms/weapons. It looks there are plenty of options, with more head sculpts than body sculpts! 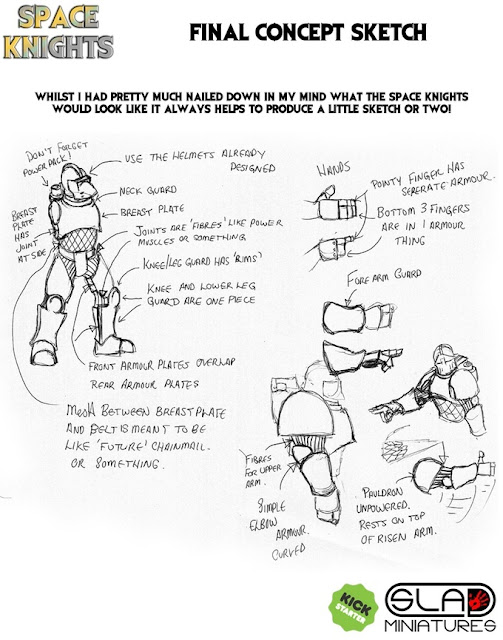 Keep an eye on Kickstarter, this looks like it's going to launch very soon!
Quick edit: It's live!
See here:
https://www.kickstarter.com/projects/1835446295/space-knights
Posted by Ralph at Wednesday, August 03, 2016 2 comments:

Ion Age - Prefecta Aimar of the Styx Legion free for all August 2016!

The Styx Legion is our name, our term, for the Shia Khan formation numbering we estimate in excess of ten thousand battle ready aliens holding key ground on Camarthen Prime. Their glimmer suits are distinctive and deep red in colour trimmed with black fittings and while the majority of the Styx Legion seems to be composed of Legionaries armed with the Juno and Apollo weapon systems there are other troops in the ranks. Be aware we do not count the Goblin Maligs in the total for this legion as there seems to be an inexhaustible supply of these foul creatures which are treated as entirely expendable. Legion Prefecta's lead Pioneers as well as legionaries and have been seen in command of Warlords and other as yet uncategorised aliens and death machines. It is the standing order to all Prydian troops to attempt to capture a Prefecta alive as up to this time we have been unsuccessful in doing so as they always fight to the death.

Did you enjoy July? We did and if you missed the release of the Afara Strider you can see our first mecha on the link; it fits right into Callsign Taranis. August is here and it is the anniversary of our third year in this new and improved Ion Age which means celebration. We begin with the thirty sixth free monthly miniature and this time it is a 15mm Khanate Empirecharacter the power sword armed Ordos (platoon) officer of the Legions. It is free in every order every time all month before being retired. This miniature is automatically put into every order at the rate of one per order regardless of order value. It can also be bought in any amount on the monthly IMP page of the website for this month only too before being withdrawn on the first of next month. It is the final member of the twelve of the now released 'Year Three Collection'. 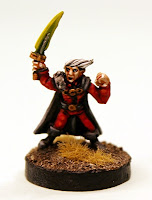 IMP36 Prefecta Aimar of the Styx Legion is ideal to lead your forces on the table if you play as the Shia Khan Empire and like to collect Legionaries or Pioneers or even to command your Maligs. This miniature is in one piece and stands approx 16mm tall. We realise that some of you may wish to purchase the currently free miniature to get multiples of it without placing a lot of orders so you can do just that. Go HERE. There is a growing page on the Ion Age website where the current and all former IMP series free miniatures are shown so that you can see what came before. Enjoy looking at them and go HERE. 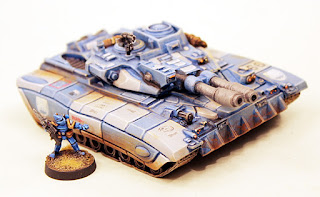 We ask you to sign up for a website account with us on your first order. Why? For one reason only. Not to send you emails (we never will. If you want our emails sign up for our Mailchimp list on the right top of the blog) or to pester you; but only to keep track of the Reward Points that all orders with us earn. Reward Points through our online partner Sloyalty which can be used once accumulated to get discounts or free stuff at any point in the future. Learn more about this HERE. Every order earns Reward Points! Yes free extra value. Part of our promise to keep the fun in wargaming.

This is our first article of the month and other events, releases, ideas and wargaming fun will occur across the month and they will all feature on our blog and in our emails. If you are coming across this article later in the month or further into the future have a look at our blog and see what has been happening since.

This miniature is free in all orders until the early hours of the first of next month!