I've made some progress on my 15mm Sci Fi interpretation of the Invid Invasion storyline.  Most of it is planning and shopping lists, but I do have a few figures selected and ready for early games.

This will closely match the series that inspired my games.  I plan to make a small (2' x 2' or 2' x 3') table with some kind of dead grass/scrub appearance - this will represent most of the North American interior.  I envision most of the farmland to be long gone, and wind/acid rain erosion has begun to cut away the hills and forests.  Basic styrofoam hills can be added to this tabletop - flocked with a dead grass color, and with random tufts of taller grasses and rocks scattered about.  A muddy river would also be a good addition to this terrain set.

Buildings will be a fun mix of styles.  Ruined urban battlefields certainly aren't out of the question, and are easily represented by my growing collection of Proxie Models goodies.  The few humans that are still free are probably hiding out away from the cities, forming refugee camps out of whatever they can find.  Once again, I already have the right models - GZG Shanties and Battle Works Studios' Startown Slums.  The only buildings that will take a bit of thought are the Dominion's structures.

The biggest difference between my setting and the original series - why did the aliens invade?  What are they looking for?  It was the Flower Of Life in the original Robotech story - a plant that was the basis of the Protoculture power source.  I'm going to change the story a bit here.  Instead of a flower, the Dominion has invaded Earth to harvest some mysterious crystals that appeared after the previous war.  I've had my eye on these Gale Force Nine crystal battlefield sets for awhile now - one set of these will give me enough crystals for a few different setups. 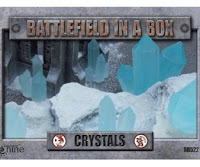 This wasn't a tough choice.  I want to play an assortment of small games in this setting, maybe 10-25 figures and a vehicle or two per side.  The setting itself will be a blasted, post-invasion Earth, with some alien elements introduced to our ecosystem.  USE ME UM007 Post Apocalyptic, reviewed here, is the perfect ruleset for this setting.  It gives plenty of room to customize figures and vehicles along with some rules for hostile environments.

I've decided to go with Critical Mass Games' Kaamados Dominion as the alien invaders.  I'm simply calling them the Dominion for now - no reason to start completely from scratch.

The rank-and-file troopers of the Dominion will be the Vivipara figures.  These are numerous but tough, and used for all manner of basic military roles.  In scenario terms, these are the figures most likely to be needed for routine patrols, leading attacks upon human survivor camps, and supervising human workers at the crystal mines.  Here's what I came up with for game stats: 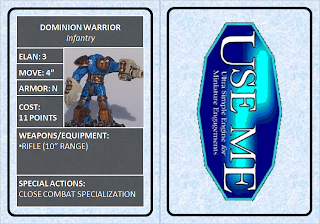 These Dominion Warriors will be led by more powerful Battlesuits.  The Kaamados Draco Aganath Imperator will fill this role.  I'll loosely follow the original storyline with these.  Warriors who have proven their worth to their masters may be mentally and physically "upgraded" to wear the battlesuits. 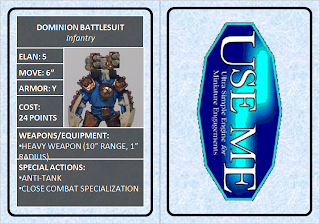 Those figures will handle most of my games.  I might need something a bit larger for special scenarios.  Ravenstar Studios' Ripper and Slasher drones would be great super-heavy support for the Kaamados figures.  Another possibility is the Mecha Arachnid from Blight Wheel Miniatures.

In the Invid Invasion series, we see that the Robotech Expeditionary Force makes several (unsuccessful) attempts to recapture the Earth.  Since a 15mm game on a 2x2 table isn't going to benefit from 8" tall transforming jet mecha, I'm scaling my own Expeditionary force back a little bit.  The basic light infantry will be a combination of simple field-capped troopers.  I painted an RAFM Planetary Militia figure as a demo, but the GZG Colonial Militia will provide a better assortment of poses and weapons. 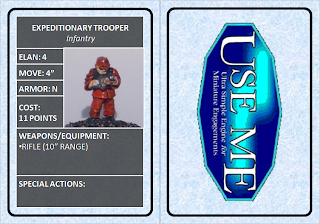 These basic infantry are augmented by armored jet-pack warriors - those receive the best training and equipment.  I finally have a use for my Blue Moon Orion Republic figures! 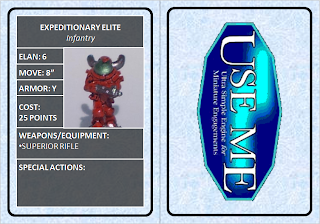 Both types of troopers will be supported by Brigade Models Eurofed hover tanks and transports.  There are some good mecha options if I want to pursue that route instead - my Rebel Minis Earthforce HAMR suits are already painted as a fairly close match.  ArtCrime Productions' Assault Valkyries also have a fitting appearance, and might be a better size for this type of game.

It won't be tough to find a wide variety of human resistance fighters and liberated workers.  GZG Armed Colonists and Ravagers, RAFM Guerillas, Rebel Minis Post Apoc Survivalists... the list goes on.  I'm going to hold off making permanent cards for them for now.  Some interesting characters might develop after my first few games... I can just use the basic downloadable force roster until then.

I can play a few early-invasion scenarios using figures and terrain that are already finished.  And when the weather clears up a bit more, I'll do another one of my weekend terrain projects to get the scrubland table and some scatter pieces built.  I'll keep posting updates as this setting progresses.

The unit cards that I've shown for USE ME, FUBAR, and Blasters & Bulkheads were all made using Microsoft PowerPoint.  I know Omer Golan already shared his Paint.Net version - and if you're comfortable with graphics programs, you should definitely use that one.  But I don't know a layer from a lasso tool.  So I work with what I can, and my cards seem to be well received..  So - I share them with you: 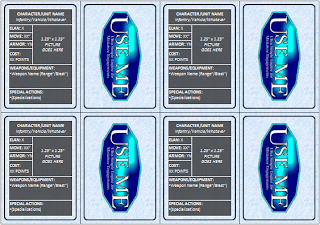 USE ME BLANK CARDS

This is a blank version of the above USE ME cards.  The cards are 2.5"x3.5", and the pages are US Letter size.  If you have any basic knowledge of PowerPoint (or OpenOffice.Org Impress), you should have no problem altering the text, adding pictures, changing the background to a cool camo pattern, or whatever else you need to do.  Enjoy!