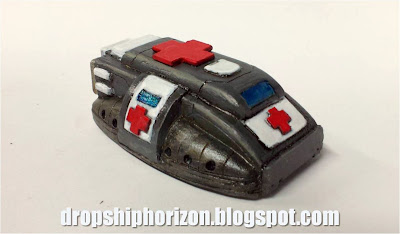 Ravenstar's basic utility vehicle is ideal fodder for these types of conversions. Adding the red crosses was pretty straightforward. For the big one, I took a scrap of plasticard (the stuff with the tiny square grid/tiles on it), cut it to a square 4 tiles by 4 tiles, cut off the four corner tiles, and flipped it upside down. The smaller crosses on the doors and hood needed more flexibility for the curved surface , so I used a scrap of glossy cardboard and cut the squares with my hobby knife. They may not be perfectly symmetrical, but I'm not exactly the worlds most stringent perfectionist. :)

After that, all that remained was applying same paint scheme used on the figures, propping the vehicle on a single washer (to get the hover skirts just slighty off the terrain), and setting up the photo box. This really is one of the best reasons to collect 15mm sci fi. These aren't from the same designers, sculptors, manufacturers, or even the same continent. Yet they work together seamlessly. The Jackal even has a hatch on the back which would easily fit the grav-assisted litter with a patient.

This is exactly the kind of unit I like to field in my smaller-sized wargames. For a scenario, I'm thinking about setting up an urban battlefield with a key objective building. Some goons in that building are holding a team of badly-injured heroes. The medics, escorted by a similar-sized security detail, will need to get to the objective building, stabilize the wounded, load them in the vehicles, and withdraw before enemy reinforcements arrive.

Since the vehicles already match, I might simply let the Combat Medics take my Laserburn Law Enforcers as their security detail. 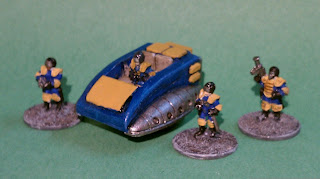 And for the goons, I'm thinking either HOF Post Apoc Warriors...

I'll post a battle report as soon as I get a chance to run the scenario.