.
Just a heads up. Received Tomorrows War v1.1.0 from Shawn at Ambush Alley Games this morning hot on the heels of v1.0.9, and let me tell you it's good. Really good! 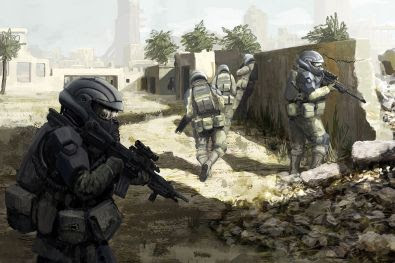 Moving In by Wiredgear
Excellent military Sci Fi artist
Note: This is an illustration I like.
It's NOT official Tom.War artwork.

Tomorrow's War is very definitely grounded, hard and gritty futuristic combat without using a catalogue of highly developed weapon and vehicle stats as a crutch. A very much "If it bleeds we can kill it" practical approach is displayed throughout the design.

I've enjoyed reading through the draft before even getting to put figures on the table - this is a complete game that will be at home whether set in your favourite Future/Sci Fi setting or in Tom.War's own emerging and believable universe. 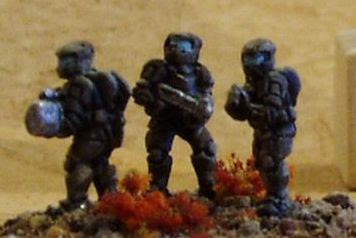 GZG classic New Israelis from my collection
This is not just Force on Force with ray guns or Daleks in downtown Baghdad. The Ambush Alley team could have taken the easy route and a couple of months after releasing Force on Force, brought out a Sci Fi variant with a few pretty pictures, a thin mantle of Sci Fi and enough of a whiff of futuristic language that WW2 and modern gamers could dip into Sci Fi using a known rules system.

But they didn't. Shawn and the crew have worked extremely hard to create and refine a Sci Fi combat game built on the AA & FoF engine but not as a slave to it. If Jeremy Clarkson can describe a car supercharger as "air goes in, witchcraft happens and you go faster", then here be witchcraft!

Tommorrow's War WILL be the platoon level rules that 2010 will be remembered for.
Cheers
Mark
.
Posted by Mark at Sunday, March 14, 2010