I've noticed something about us 15mm Sci Fi gamers.  We suffer from tunnel vision. 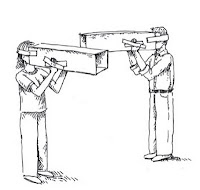 It's not something to be ashamed of, and it's certainly not exclusive to our little corner of the world.  Everyone gets it sometimes.  But when we get it, it results in months of delayed purchases, unpainted minis, general disappointment in the hobby, and at worst - frustration and anger at the manufacturers.  And one of the leading causes of this tunnel vision?  Settings for our 15mm games.

We switch to 15mm for all the right reasons.  Tons of products available, excellent variety, good value, very inspiring (and obviously humble) bloggers, you know the drill.  So we take the plunge, buy some figures, buy some more figures, paint a couple of them, buy a bunch more figures, buy some vehicles, print some rules, buy some figures... and then we're stuck.  No idea what to do with them. There's no Codex - how do we paint them?  There's no novels or movies about these figures - so what are they fighting over?

So we look for inspiration.  We all have a creative side - we wouldn't be shopping for 15mm sci-fi miniatures if we didn't.  But ultimately, we want our games to be familiar.  A favorite movie, book, TV show... or an existing RPG, maybe even a miniature game in a different scale.  That's what we want to play.  So we decide to play it, especially since we know exactly how it should look on the table...

But wait.  Nobody makes a 1/100 version of that particular figure, that vehicle, that aircraft.  Now we're stuck.  What do we do now?  We talk to our buddies, we write blog posts about it, we turn to TMP and other message boards for advice.  How many threads have the title "What's a good ??? in 15mm?"  "Looking for ??? in 15mm!"  "15mm Proxies for ???"  Or requests for manufacturers to create a knock off version, just so we can get those perfect minis in 15mm...

For the most part, it's never going to happen.  Because of intellectual iroperty laws, copyrights, etc., we're never going to get those specific miniatures made in 1/100.  So we get stuck.  We have piles of unpainted lead and we stop playing games.  We beg manufacturers to release things they'll never get away with.  We do everything possible to get that specific setting, in its original detail, onto our tables.  What we never do is stop, take an objective look at that entire setting, and figure out the reasons we like it in the first place.

What if we make the fundamental storylines into something which fits current miniature ranges?

Look at it this way.  We can wait months, years, or forever for manufacturers to release that "proxie" that gets us close enough for our lofty expectations.  Or we can apply just a bit of creativity, and change a few aspects of the story, the aesthetic, the technology... whatever it takes to play that theme, that idea.  If we do this correctly, we may end up liking our new creation even more than the original setting.

I really think anyone can do this with any novel, comic series, movie, TV show, or video game.  Do we really want to play the Battle of Naboo, but are disappointed by the lack of 1/100 Battle Droids and Gungans?  Let's stop looking for proxies, open ours mind, and create our own version with hordes of Khurasan Mekanoids attacking a jungle full of technologically-outmatched Blue Moon Fereen.  Want to run the final battle in Avatar but can't find any Na'Vi?  Let's relax and play a fun intepretation with Splintered Light Leonines.  Or here's a common one: 40K in 15mm.  Do we want to wait for the perfect Space Marines, Tyranids, and Tau to be released?  Or can we focus on the basic theme, and create our own interpretation with Blue Moon Orions, Khurasan Space Demons, and Eureka Ventaurans.

It's tough to do this, especially when we have such specific visions in our minds.  But let's choose the most important elements of the stories and be creative with the rest.  There are dozens of great figure and vehicle ranges in 15mm Sci Fi, and more new items are coming out every month.  It isn't worth sitting around waiting for that perfect "proxy" or "not-this" to come out.  We should make use of the nearly-unlimited game possibilities available right now.