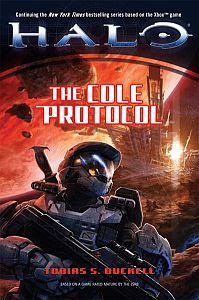 If you want a cracking old school Sci Fi read with lots of wargames potential, pick up a copy of Halo: The Cole Protocol by Tobias S. Bucknell.

The sixth novel set in the Halo universe,  I couldn't put this book down once I began reading and finished the 358 pages in a single day. Don't worry if you are not a fan of Halo, or have not read any other books in the series, it stands alone in it's own right as a worthy piece of Science Fiction writing.

There are asteroid colonies, space battles, stealth ships, insurrectionsists, independants, smugglers, special forces, orbital drop troopers, aliens by the bucket load and of course the ubiquitous Halo Spartans. Kimball Kinneson and the Galactic Patrol would have been right at home among these pages and could have been transplanted into the story without missing a beat.

Without giving too much away, the Cole Protocol is a UNSC directive to ensure that navigation data leading to Earth and the Inner Colonies does not fall into the hands of the alien Covenant forces.

On the rim of the Outer Colonies, in an independant colony hiding in the trail of a gas giant, one man has a nav. chip that contains data that could lead the aliens to earth. The smugglers want it, the Independants want it, the aliens want it. Lieutenat Jacob Keyes, a platoon of Orbital Drop Shock Troopers (ODST) and the stealth frigate, UNSC Midsummer Night find themselves in an unequal battle to recover the data and forestall an alien invasion.

For an in depth summary of the novel including plot spoilers visit Halopedia (click here). If you are a Halo fan, note that some Halo diehards see The Cole Protocol as playing a bit loose with the canon, but as Bungie have been doing that for years anyway.......

Sad I know, but rather than stuff the suitcase with novels I also took the latest beta version of Ambush Alley Games' upcoming Tomorrow's War rules with me on hols. I wanted to thoroughly familiarise myself with the systems whilst I was relaxed, with no other pressures or distractions and with plenty of time to spare.

As a consequence, as I read The Cole Protocol I easily found myself visualising it more as part of the Tom.War 'verse. Not only that, but I visualised the action in the book, and there's plenty of it, as Tom.War tabletop games with 15mm figures. This was helped along not a little by the not quite Spartan figure on the book cover reminding me of some new Federal Army figures heading our way in September from Khurasan Miniatures.

So, I drafted up several scenarios based on episodes from the book, mostly written for Tom.War with the new Federal Army minis in mind (as ODST'ish proxies) and will share these with you over the coming week.