.
My week has been stolen by the arrival of samples from Khurasan Miniatures forthcoming 15mm Sci Fi Federal Army range. Not only have I been playing around with the miniatures, working out different organisations and fireteam basing options, but using my 'Google-Fu' to get inspiration for a suitable camo scheme.

The figures are 18mm sole to eye, and all of comparable heights and proportions to newer figure ranges on the market The soldiers all wear closed helmets, chest, shoulder, knee and lower leg armour. Overall the figures have the right 'feel' to them of being soldiers in miniature. This is particularly demonstrated by the way the weapons are carried. You can feel the weapons have a weight and balance in their hands.

No apologies, I'm going to begin with my favourites from the Support Weapons pack. This pack contains a Team Leader, Grenadier, SAW, MAW Gunner MAW No.2. 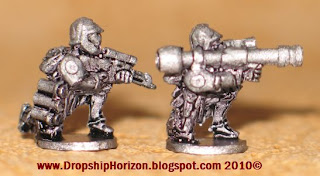 Khurasan 15mm Sci Fi Federal Army
L-R: MAW No.2, MAW Gunner
There are five different castings in the Fire Team pack. A Grenadier and four Riflemen. My photo does not do these figures justice, particularly the two advancing figures on the left.

Khurasan 15mm Sci Fi
Federal Army Fire Team
The figure holding his rifle in his left hand can be used as an alternative fire team or squad leader. The Grenadier is not just some johnny standing bolt upright firing his weapon. You can see that he has it braced and firing slightly hgh to compensate for the trajectory of the lower velocity grenade.
Finally, there's a Command Pack which contains a Squad Leader and armed Medic. 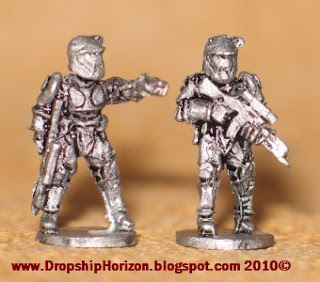 Khurasan 15mm Sci Fi
Federal Army Command Team
As you can see, the Federal Army range are suitable as Near Future transitional troops or Sci Fi planetary forces. If you are searching for an opposing force for Eureka's Sci Fi Germans, the Federal Army miniatures would make great Neo-Sovs in an AT-43 style Red Blok camo scheme. I can also certainly see these in the role of Ghost Recon Future Warriors, HALO Marines or even ODST (Orbital Drop Shock Trooper) proxies. To an old Sci Fi grognard like me, there's just that something about them that cries 'classic' Traveller: Mercenary. And of course, they will be right at home in Ambush Alley Games' forthcoming Tomorrow's War.
Jon envisions his Federal Army troops to have smallarms that are equivalent in firepower to today's SAWs, Grenadiers deploy underslung grenade launchers capable of firing powerful, programmable RAM Grenades.
Due to a little slippage in the casting schedule, it's likely to be a few weeks yet before the Federal Army packs are available, but it's well worth the wait.
All in all, a versatile, well thought-out and designed set of miniatures, allowing you to build a platoon or two with enough variation to prevent becoming stale. Armour is on the way and Jon has plans to augment the range some time in the future with more command, snipers and at least one heavy weapon. If you have any thoughts on additional troops or the type of heavy weapons you'd like to see, share your ideas in the comments section below.
Now off  to paint them!
Cheers
Mark
.
Posted by Mark at Sunday, September 05, 2010