Mark Mondragon has expanded the DreamForge Games plastic kits Kickstarter - the 15mm version of the Crusader is now available for pre-order! 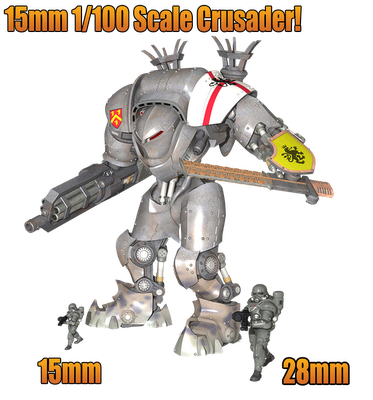 Mark is already famous among the 15mm Sci Fi crowd for sculpting many of Khurasan Miniatures' "big guys," like the Siler super-heavy tank, the Tribal Dual-Purpose Light Spaceship, the Mekanoid Dictator and Hatchet, L-HAC Battle Mech, and the Parasachnid Ogre Beetle. He started DreamForge Games to design and produce figures and vehicles for his Iron-Core universe. Most of his products are 28mm, but he released a 15mm resin Crusader early this year (and it sold out almost instantly!).

DreamForge Games is using Kickstarter to make the leap from pricey resin kits to high-quality injection-molded plastic (these will be produced through Wargames Factory). The Crusader will be the first 15mm Sci Fi mecha release in plastic - and who knows what kind of possibilities this could open up in the future?

The 15mm Crusader will stand 4.5" tall. Kickstarter orders are $44 for one, $79 for two, or $105 for three mecha. DreamForge has ambitious plans for additional weapon arms, complementary vehicles, and 15mm infantry in the future.