Today we have a guest post from Hans over at Trojan Points. Based on the Catalog posts that we did last year (and need to update!), he compiled a definitive list of 15mm Science Fiction Buildings available today. Let us know if anything was overlooked in the comments, and then we'll copy this article over to a permanent sub-page like the others.

As both a complement and an homage to Dropship Horizon's very useful miniatures catalogs (Extraterrestrial Lifeforms, Non-Biological Lifeforms, Human Power Armour and Non-Military Humans), and generally awesome blog, the Architecture Department of the Trojan Institute of Technology has been busy reporting architectural trends in the 15mm future! Excluding unique scratch-built designs, our specialists have classified most buildings in the galaxy under five categories: Prefabs, Industrial Buildings, Third Wave Buildings, Shanties and Alien Buildings. Furthermore, they've identified a new trend: buildings scratch-built from local materials but upgraded with standardized Parts and Fittings...

While the concept of ready-to-live dropped-from-orbit buildings has often been discussed, most colonies start with some sort of Prefabs.

Most colonies (although not all of them) are created to take advantage of some local resources. So once basic lodgement has been taken care of, the next order of business for more colonists is Industrial Buildings.

Third Wave Buildings are so called because after prefab and industrial buildings, they constitute the third wave of building on most colonies, usually as a replacement/upgrade to the first wave prefabs.

Shanties are improvised dwellings made from scrap materials and build to compensate the lack or scarcity of other types of building. Unsurprisingly they're usually inhabited by the poorer fraction of a colony (which on certain planets might be most people). 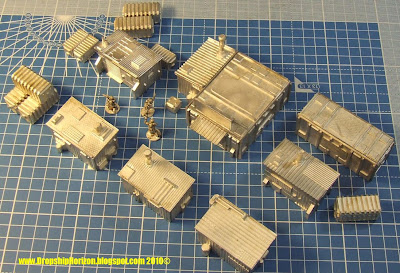 A GZG Shanty Town, complete with bars and containers

Alien Civilisations bring with their culture unique takeson architecture. One can indeed lear a great deal about their way of thinking and living by studying the way they build their dwellings. 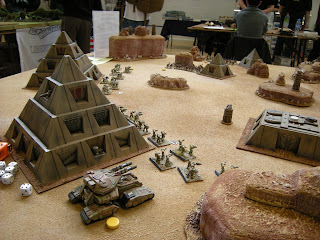 You want to upgrade that local materials (read scratch-built) or traditionally constructed (read building originally designed for historic games) dwelling with the comfort of whichever century you live in? You need parts and fittings! 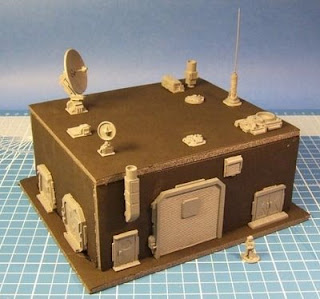 A foam core box with various GZG Parts and Fittings, from GZG store

I voluntary restricted myself to production models (not custom builds), sci-fi (not anything else usable for sci-fi) and buildings (not natural terrain). Even so, I probably forgot a few items: I stand ready to be corrected and to discover new gems!
Hans from Trojan Points
Posted by Chris K. at Sunday, February 10, 2013