The response to 15mm.Co.Uk's new Security Forces Alpha range has exceeded many expectations. To learn more about what it took to bring these figures from concept to production, here's an interview with lead designer Gavin Syme.

CK: Welcome back to the Dropship, Gavin!
GBS: Thanks for having me back.  Always a pleasure to talk about 15mm science fiction miniatures with Dropship Horizon.

CK: Most of the HOF releases have been spread out, such as basic infantry packs followed by command and support at a later date. Why did you choose to have such a large initial release with Security Force Alpha?
GBS: It is true that we tend to stagger releases across the HOF 15mm Science fiction range and we do this for several reasons. Firstly you have to know that we get so many requests for new miniatures from our customers that we simply cannot make them all.  I take all of the suggestions and once a month I total them up into 'pack titles' and put forward the top two or three for sculpting.  I have worked this way for more than five years now and it has directed the expansion of HOF more than any other factor; giving wargamers what they want and ask for.  Secondly I am open to some wild ideas in miniature design beyond the typical 'more hard sci-fi armoured human troopers' and often when these are designed we have no idea if they will be popular enough to expand beyond a straight pack of  central infantry poses.  The Zidhe, the Octopod, the Rim Mercenaries, the Automatons all began this way and were expanded. Currently packs like the Alien Flora and the Aquafids may or may not get expanded depending on the demand for them from wargamers requests. 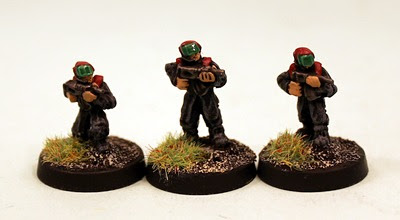 Lastly the reason I chose to release all eight current packs for Security Force Alpha was down to the fact that we have many requests for them as I have explained already and they were not the 'wild' ideas on the edges of the hobby as outlined.  So our 'generic human expansion' had to include all of the poses and packs that were requested and the best way to do this was a release all at once.  Humans are the centre of the 15mm universe quite rightly and the demands for 'non-power armoured soldiers of the defence forces or second line', often ignored, could only be met if a whole platoon or similar sized number of poses were put out at once.   Time will tell if I was right in this estimate but a few weeks in it is looking like I was indeed correct. 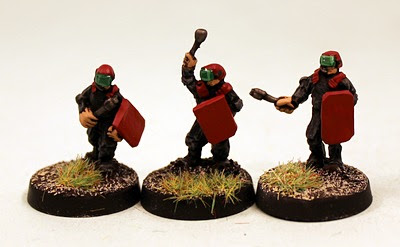 CK: Security Forces Alpha has a variety of figures that aren't usually seen in human ranges, such as shotgun and riot-patrol troopers. Does this initial release match the planning concept for this range, or did it grow beyond its original idea?
GBS: I like to see more than the usual poses when releasing miniatures of any scale and type.  This makes the hobby more interesting and keeps variety going which I believe is key to keeping players coming back for more.  The planning stage for Security Force Alpha was very organic and grew from a gamer led desire for a Human army that could stand in many settings and possible futures.  We knew that it would need a command set and basic troopers along with some degree of support weapons too.  As we progressed I discussed the project with designer of the SFA, Elton Waters, we just kept on adding poses as ideas and feedback came in.  Wargamers in my experience like to have several poses of miniatures in a squad and like a bit of variety.  From three SMG troopers we went to six, the shotguns were added to give close in urban or starship corridor firepower.  Typical support weapons are different from those designed to disable armoured vehicles or mecha so a pack came in there too.  The SFA is not the force of a tyrannical stellar empire so it should have a degree of compassion for its populace and this led to a riot team pack.  I wanted pacification for campaigns as well as brutal firefights. 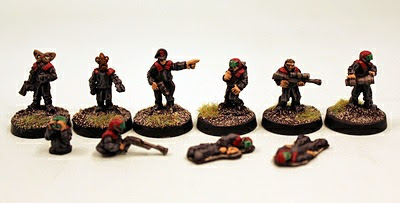 I should also mention the HOF95 SFA Command Pack, which is a first for HOF and for me in that it is a pack of ten miniatures in ten different poses. This meant a higher cost and complexity in design than normal, after all its contents could be as many as three packs normally in terms of poses but they all make sense for the pack.  You purchase it once and you get not only the high command but also turret gunners, casualties and personalities such as military aides.
So SFA did grow beyond its initial concept but not in terms of the packs but more in terms of the variety of poses within them.
It went from being an expansion to the HOF range to being the core of something much greater.

CK: Has the early customer response to Security Forces Alpha been favourable?
GBS: Very!  To be frank the initial response to Security Force Alpha was unlike any other recent releases for 15mm.co.uk.  Not since the first USEME rules set came out have I had some much email about a new product.  Along with orders there was also online comments including on Dropship Horizon and elsewhere.  Normally I put work into releasing new HOF as single miniatures a month or so after the pack release but in this case feedback moved me to make the thirty odd single releases just a week later.  You could be cynical and say that it was to catch all of the orders from wargamers wanting to sample the range or who just want casualties or other unique poses in great numbers but I really do want to make 15mm players happy as well as serve their needs.  We all need to make a living but often companies will not respond to requests and I wanted once more to prove that we and I are not at all like that; just as I did with the SHM range and USEME system. 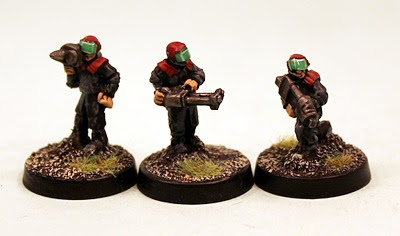 CK: Is there a chance we might see female troopers or other 'non standard' types added to the SFA range?
GBS: Certainly there is.  I have had a lot of email feedback in the last couple of weeks on SFA and on top of this comments on Dropship Horizon blog and on my own gavinsyme.co.uk domain.  Suggestions for female miniatures have increased a lot in the last couple of years from virtually zero to maybe one in fifty requests which is good enough for me to get them on the sculpt list.  The future is not going to be 'all male' after all.  As for non standard types you could call the Riot Team pack one of those and I do have immediate plans for this summer for more that is not typical troopers.

CK: What does the future hold for Security Force Alpha the 'SFA'?
GBS: In simple terms the future is expansion for the SFA.  The packs now on the market, the thirty odd poses that make up SFA are phase one of the plan for 15mm.co.uk.  While I cannot confirm exactly what we will release, no broken promises here, I can say that I will reward all those wargamers who have invested into SFA for their games with more poses and packs which will all match up with the existing range.  I have added female troopers to the plan most recently but in addition to this is a possible 'bits pack' with heads and such for conversions.  Already in the works are five more packs which will see mobility added to the SFA in the form of a jetbike (with or without rider) and jump pack equipped troopers, a gunnery team for crewing up portable artillery pieces and a speciality team or two as well.  I hope to turn SFA into one of the largest 'generic near future' 15mm science fiction choices on the market.

CK: You mention that there was a lot of thought put into the colour scheme for the Security Force Alpha uniforms.  Can you tell us about that?
GBS: Yes there was a lot of thought up into the uniform colour scheme for the SFA.  In fact not a lot less than the 'concepting' and sketches that laid out the look of the sculpts.  I have provided an image for Dropship Horizon readers here to look at and it shows some of the uniforms that were considered.  As those who paint miniatures will know the colours used have a dramatic effect on the miniatures and while we did not use all but one of the uniforms the ones shown do present some great ideas for a force.

From the left you can see front and rear views of the  Arctic Prowler uniform, the Hazmat Clean Up uniform, the Pulp Spaceman uniform and the actual SFA typical red and grey uniform.  Using white and greys with a blood red visor the winter setting uniform I think gives the SFA a meaner look which would work for winter worlds and also urban and bleak futures too.  Hazmat suggests not only the risky job of cleaning up spills and leaks but also a possible post-apocalyptic setting which sees the SFA going toe to toe with mutants and rad land nasties with its mixed yellow and greens with a blue visor.  The Pulp uniform takes the SFA to a whole new place where the enemies might be little grey or green men or even clanking robots.  Rich purple and an orange visor is nothing like any real world military uniform and puts them firmly in the imagined future past.  Lastly the actual uniform used just for a comparison.  We eventually settled on this uniform as its middle of the road and usable for many settings.

I want to point out that Eve Hallow came up with and then painted up all of the master patterns for uniforms on the SFA which came to a total of eight along with every pose in the final uniform too.

CK: Thanks again for coming by, Gavin.
GBS: Thanks for taking the time to read this and come along to 15mm.co.uk to see what we are up to at the moment.
Posted by Chris K. at Sunday, April 14, 2013