January brings out three new packs of figures for post-apocalyptic/horror gaming. Sculpted by me (Eli Arndt), I have tried to bring to life some popular themes found in the genre - hoeroic justice fighters, disgusting shamblers and wild raiders. I'm hope you will recognize some familiar characters in this batch as well as find some new personalities and creatures to capture your imaginations.

Thanks for checking out Loud Ninja Games and here is Gavin with the official release info...

Loud Ninja Games headed up by designer Eli Arndt have released three new 15mm packs into the part of the range Wasteland and Mutants on their page at 15mm.co.uk. They join, not only the other packs in that part of the range, but of course the Alien Encounters, Ikwen, Yandrassi and the Chuhuac with over 30 codes into total! Go here, for the whole range and you can refine by search for only Wasteland packs if you wish.

The three new packs are excellent for present day gangers, post apocalypse raiders, near future hunters, and most anything else that needs weird and wonderful in 15mm scale. Highly detailed white-metal miniatures sculpted by Eli Arndt. Here are the details. 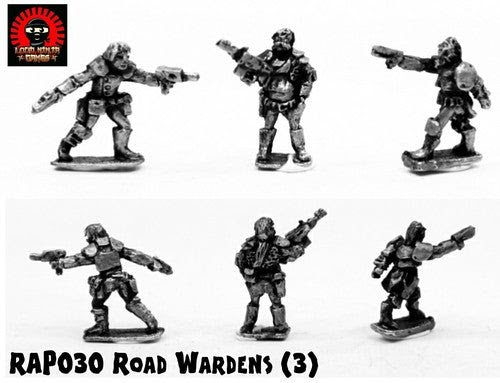 RAP030 – Road Wardens
This pack contains three different highly detailed 15mm scale white-metal humans with pistols and a rifle all wearing light armor. Even in the wastes, there are those who cannot abide evil. These brave men and women take up arms in the name of something more than simple survival and take to the roads dispensing justice. They are known by many titles but often go by a more classical, romantic title – Road Warden. All miniatures are supplied unpainted and without bases.

RAP031 – Rad Zombies
This pack contains five different 15mm scale white-metal radioactive zombies in various poses. Exposed bones, melting flesh and grinning skulls, these are scary foes! In the wastelands and the ruins of the old world, there are those who have been so changed that even after death they continue to menace the living. Whether it is through strange energies, chemical cocktail or mutant virus, Rad Zombies now roam where man once dwelt seeking to feed their insatiable hunger. All miniatures are supplied unpainted and without bases.

RAP032 – Wasteland Raiders
This pack contains nine different 15mm scale white humans in various poses. Crude weapons, scavenged firearms, punk style hair, rough clothing, these are the guys that haunt the innocent in a nightmare future. In the shadow of the world before, there are those who are so intent on survival that they leave behind all pretence of civility and community, choosing instead to make their fellow man their prey upon which they sustain themselves. Those who take to this life live as bandits, raiders, and much worse, banding together to use might to make their living as Wasteland Raiders. All miniatures are supplied unpainted and without bases. 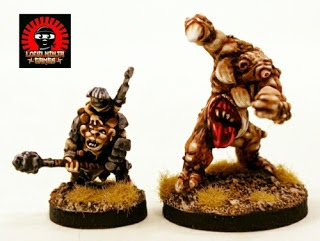 These new packs go excellently with the fearsome Terrorclops and the helpful Wasteland Buddies as well as the not pictured here Mutants and Super Mutants in the range. RAP028 and RAP029 sculpted by Eli Arndt and painted here by Sam Croes. Enjoy!

Thanks for Reading!
Posted by Eli Arndt at Tuesday, January 26, 2016