March in a New Special Figure from The Ion Age

Gavin and crew keep the tradition alive and well with yet another fun-filled, inspired special figure for the month of March. The monthly special figure has become a really fun tradition from The Ion Age and because of this, the start of each month is like getting a little present. Even if you don't pick up the special miniature (why wouldn't you?), it's great fun to see what cool, crazy, and fun ideas Gavin and his designers come up with.

So, without further blather and malarkey from me, here's Gavin...

“We captured a single Malig during the repossession of Jutland Hub in the Winchester IV campaign last month. Just one. We killed thousands of them and not a single one showed any hint of pity or of self preservation. They attacked, they fought and they died. All but one. This single Goblin we captured in the smashed frames of the Glittergirls Bar on the 7th street. Glittergirls as you know is a place for fun and frolics. Well this Malig had gotten into the stocks of ale and spirits and drank itself into an almost stupor. As we swept and cleared we missed it hidden a great pile of empty Ninis bottles. Ninis is potent so we took the opportunity to put restraining cuffs on its hands and feet. When it came round we were astounded to find that it could speak our language. Rumours of Khanate brain harvesting must be in part true as this Goblin had a huge lump on its forehead which was covered by a looted Ninis brand top hat. Groggily it told us its name and its mission.

His name, for it was a Goblin male (not that the females look all that much better) was Padraig O'Malig and he was a member of the highly esteemed Kirish Clan. The Kirish was held in high esteemed by other Maligs for their feats of might as well as humour and story telling. Entry into the Kirish required being able to pass the Crack meaning to squeeze oneself through a tiny gap between standing stones. This done a full day spent in the worst conditions possible including artic or desert terrain or near total rain fall wearing only a thin fabric top garment. If survived you were named a jumper and fierce with only one test left. To get the Messages that being to steal something belonging to the largest and meanest Khanate soldier to be found including Warlords. This done the rest of the Goblins present would present to you the green uniform of the Kirish and shout as loudly as possible 'Top O the Malig tay ya' after which the graft was applied to the skull giving increased brain capacity. The Kirish accompanied Malig Tesserans into battle given the job of 'beyont' (this word does not translate) meaning deep scouting to steal or vandalise enemy hardware or strong points. The only reward it seemed was a temporary relief from the added strain of thinking called naggins (does not translate) to imbibe enough alcohol to render them senseless for many hours. Glittergirls Bar had provided this early.

Padraig seems keen enough to stay in our holding cells as long as we feed him and provide 'naggins' at regular intervals. That said in our ongoing struggle against the Shia Khan Empire the presence of the Kirish Clan could be a real problem."

Welcome to March at The Ion Age. After the massive response to the Xin Trade Fleet last month we are changing tack for March and expanding not only Dave Foley's 15mm civilians range with another pack release but also new releases into the Taranis Super Heavy Main Battle Tank range which will increase the total number of variants to well about the current twenty five. Hundreds of customers, IonFans we like to call them, have built up sizeable amounts of Reward Points on their accounts and are claiming not only such things as 15% or 20% off their orders but also a free Commander Murdo's Taranis Tank kit worth 20.00GBP. Our releases will happen in the first half of the month. I suggest that you join our Mailchimp email list (link on the top right) too if you have not already since our email lets you know what is going on and features a unique offer that is really worth it. This month it is an offer that would make Padraig smile! 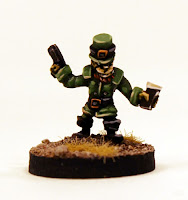 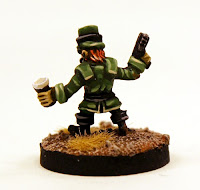 IMP31 Padraig O'Malig
For the whole of March 2016 this 15mm scale Space Goblin is automatically put into every order at the rate of one per order regardless of order value. It can also be bought in any amount on the monthly IMP page of the website for this month only too before being withdrawn on the first of next month. Dressed in mock Irish garb and clutching a pistol and a pint of stout he is great fun and a good character for your army. The miniature is one piece in white metal and stands approx 14mm tall. 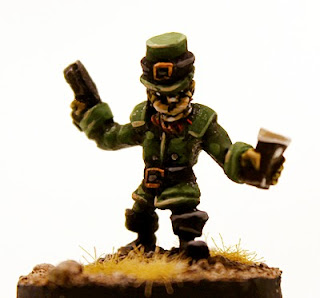 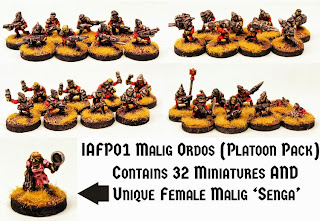 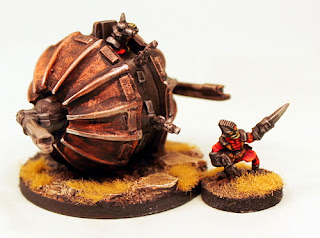 The Maligs are short, vicious and expendable slave troops of the Shia Khan Empire. We have several packs of them plus a platoon pack with the unique 'Senga' miniature included free in it. We also have the crazy Infernus Ball flame tank which you can deploy against your foes. See all of the Maligs HERE.

We look back at what was going out free this time last year and now also in our first year too. In March 2015 it was IMP19 Happy Burger Bot and in March 2014 it was IMP07 Female Patrol Officer. You can get them in the Year Collections of formally free on our website but if you click on the links over the codes you can see the blog post from that month and year and see what else we were up to at that time. Time flies and sometimes we forget and I always enjoy the new month update and to look back at last year and further...so much done and so much still to do!