Please Return Your Seats to the Upright Position


I began my journey in 15mm Sci Fi with Laserburn miniatures back in the 1970's and it seems fitting to put the skids down on my final post with some eye candy from 15mm.co.uk who are the proud custodians of the Laserburn range today. 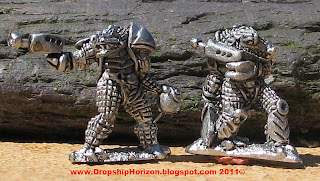 I absolutely adore these minis. They drip with personality. Perfect to be player characters in their own right. If they are sold as singles I urge you to buy them. And of course they don't come alone.

There are four 'close combat' Dracos in total, including the splendid 'Big Daddy' in the centre of the photo. This beast is 12mm across the shoulders and stands 25mm claw to cranium. His smaller brethren are 20mm high. Imagine these unleashed on an unsuspecting starship crew!

The HOF 'Retained Knights' are not new. But they were the only 'other' human range of 15mm Sci Fi minis available in the UK for many years. And you know, I am kicking myself I never bought them back then. These are surprisingly good minis and the castings simply blow me away.  For High Sci Fi/Space Opera Marines with all the style of an F1 Ferrari - these guys are fan-bloodytastic. Yeah I know there's some standy abouty poses but these guys weren't sculpted this year, or last or even ten years ago. You don't even need to paint these guys - ink them and throw them on the table! These are my new House Atreides troops. Even just inked like this they look magnificently "these are not the droids we are looking for" in the deserts of Mudd Eisely. 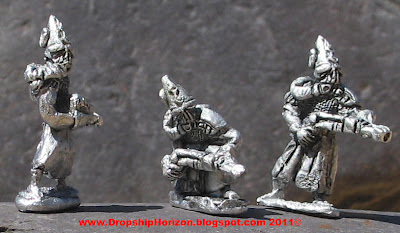 There's something about the gothic Zidhethat is different to the usual offerings. Painted up they could make really good Harkonnens.  I can see them as desert or ice planet warriors, a warrior brotherhood or post apocalypse  scavengers. Not the best in 15mm Sci Fi but plenty of potential especially as you know who proxies.

The Zidhe Jetbike. Easy to write-off as an armoured croissant from the pics on the 15mm.co.uk website. actually a very nice, very different model. The driver is a mini masterpiece and makes for a great general or high priest. A few of these bikes as 'collateral' on the streets of Mudd Eisley wouldn't go amiss. 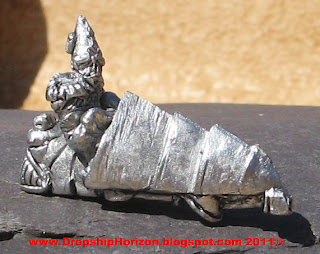 And finally my happy band of Travellers.....

Now, I previously mentioned Eli's new galactic greeblies that are available now from 15mm.co.uk's SHM range. The guy on the right has a son of Yoda and Obi-Wan thing going on but  the rest are actually quite cool. The gesticulating 'Horsani' on the left is 20mm tall and has a bird-like appearance. He is festooned with packs and pouches and for all intents and purposes is the archetypal Traveller, if not human. His pal to the right, a 'Burgansian' is 12mm tall and sits on a grav dish/chair. He has a Slitheen appearance and again is bursting with character. Moving onto the 'Vergan', umm different. It's hard to know what to say. These three in fact all four could be found drinking in the Mudd Eisley Cantina. But the Horsani, Burgansian and Vergan make a really appealing set of non-human adventurers who would take your games so far out of the box  you'd be in orbit!

The thing about the SHM Range, which I want to leave you with, is that Alex and Gavin of 15mm.co.uk have given each and every one of you, of us, the gift of equality. If you have one 15mm Sci Fi mini inside of you, all you need is some Greenstuff. You don't need to be a named sculptor. You don't need to produce a range, or even make a mould. You can just sculpt and you have every chance that Alex and Gavin will turn your inspiration into reality. 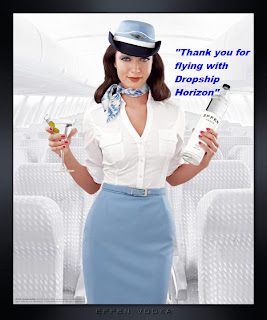 It's been a priviledge gentlemen!

New comments are not allowed.