Since before the outbreak of the Prydian Civil War the various marks of the Type 41 Skylark Patrol Flyers have been part of the Muster regiments of the Precinct. Based on a designed from the era of the Ban of Prejudice the Type 41 was put into renewed mass production on seven worlds before the Battle of Fenway Prime. While the Adder Combat Car fulfils the needed role of a multi propulsion ground transport for Muster Platoons there was a need for an armed transport that could move in three dimensions. The Skylark fulfils this role well with the objective of moving troops from a staging area to the combat zone with no intervening stages. Capable of dramatic bursts of speed with its four jet engines the howl of an incoming Skylark is common to the ears of friend and foe alike. The Type 41 was given the name Skylark during its testing on New Glastonbury with a hint of humour. That species of ancient Terran bird was brought to New Glastonbury during its long ago original colonisation and its swooping grace is very much at odds with a vehicle that puts ascetics well behind protecting itself and its occupants.
There are five common marks of the Type 41 which are broadly as follows. The Type 41A Skylark Patroller is the most common of the flyers and is used as an armoured transport capable of carrying two crew and a fire-team of four Muster usually of the Patrol. Its armament is composed of a belly mounted rotary Moth 88 cannon and a top mounted Anda 60mm Missile Pod. Less common but often seen is the Type 41B Skylark Battle Bus which retains the belly mount but has an upper hull modification adding more internal space and an upper exit hatch which means it can carry two fire-teams into the fray at the cost of some protection and fire power. Speed is the aim of the Type 41C called the Skylark Screamer where the upper turret mount and internal space is given over to an additional jet engine mounted on the top of the hull. The Type 41C is used for rapid response and to give ground fire support in open terrain. Rarer is the Type 41D Skylark Big Lift which is unarmed but is fitted with a low slung rig for lifting cargo pods and pallets. But rarest of all is the Type 41E Skylark Eye which is a command and control flyer which features extensive top and belly slung sensor packages; this mark usual belongs to a general or other top ranking officer. All Skylarks have a titanium composite hull and are rated to extreme altitude though without extensive drive modifications it is not capable of reaching low orbit.
Enter the next sequence to access basic flight training for all marks of the Type 41. Proceed now...
Academy Auto-Trainer Series 12, New Glastonbury, 4326IC 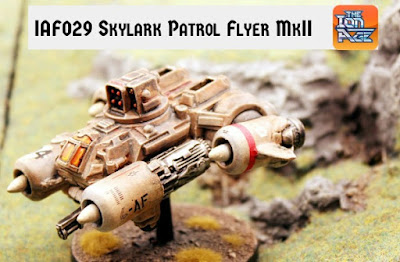 You have been waiting and now is the time! It is my pleasure to present the brand new mark two Skylark Patrol Flyer designed by Sam Croes. Go HERE or read on for more. 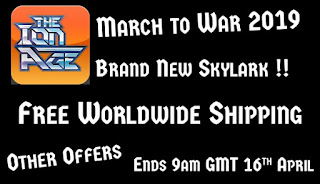 We are a wee part of Alternative Armies and as such are doing our bit in the mega March to War event which is now on! Until 16th April 2019 there is free worldwide shipping on all orders of 20GBP or more in the cart plus you get your Reward Points and you can use your Reward Points in these orders to save more. There is also 25% off the new Skylark plus several other offers. All are on our main page HERE. 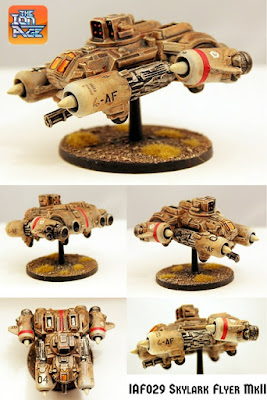 IAF029 Skylark Patrol Flyer MkII - Go HERE.
The Skylark is the main air support vehicle of the Muster Patrol and among its variants it typically carries one fire-team plus crew and provides gun runs too upon request. This, the new mark two Skylark Patrol Flyer Mark 41A is a 15mm scale vehicle in the form of a multiple part high grade grey tone resin kit. Composed of seven pieces which require assembly and can be fitted with a flight stand (not supplied). The multiple pieces are gun mounts and engine mounts allowing a good degree of posing for 'in flight' and 'landing'. Assembled the Skylark is 70mm long and 35mm across. You can find rules for its use in our own game system in the Callsign Taranis expansion book. Here is a picture of all the supplied parts of the model kit. 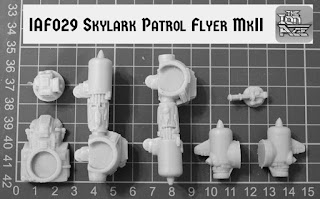 As with all our other codes you may choose from purchasing a single kit or three kits on screen with a 10% saving applied. Supplied unassembled and unpainted without a base (shown on a 40mm round base). 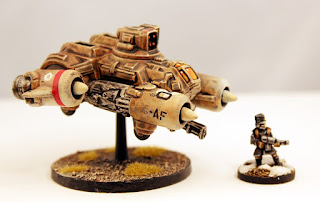 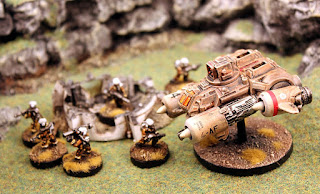 This Skylark is part of a small series of codes all around one theme. The others are IAF033 Crashed Skylark which depicts your flying vehicle on a bad day and IAF034 Skylark Cradle a structure which can hold your landed flyer. Excellent pieces with a wide variety of uses. Here are their details. 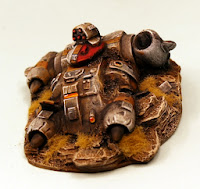 IAF033 Crashed Skylark
Fast engines and titanium alloy armour are not always enough to keep you up in the air and clear of danger. This Skylark Patrol Flyer has been shot down after a really rough exchange of fire with the enemy. Crashed into the rocky terrain of a world in the Prydian Precinct it lays with smashed engine housings and a battered hull. Lots of details and an excellent narrative piece for your games or simply as battlefield terrain. The Crashed Skylark Patrol Flyer Mark 41A is a 15mm scale vehicle in one high grade grey tone resin piece with is about 70mm across at its widest point. As with all our releases if you purchase three you can get 10% off the normal price. Go HERE. 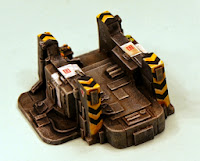 IAF034 Skylark Cradle
This one piece high grade grey tone resin structure fits right in not only with the IAF029 Skylark its designed to cradle for repair and reloads but also with the rest of the Ion Age 15mm terrain range such as the IAF015 Hab Dome and the IAF024 Fabricator Spire as a building in its own right. The Cradle is an industrial building with a high degree of detail. It is approx 70mm long and 60mm wide. As with all our releases if you purchase three you can get 10% off the normal price. Go HERE.
This is our release for April 2019 and we hope you like it. March to War ends at 9am GMT 16th April (shipping returns to normal as does the price of the new Skylark).
Thanks for Reading,
GBS
Posted by Gavin Syme (GBS) at Friday, April 05, 2019