Latest Purchases: pulling it all together

,
Took some time at home this week and just as well. Torrential rains over several days saw us being cut-off for 24 hours as the local rivers burst their banks. It gave me an opportunity to plan and order this month's purchases with an eye on completing 'wish lists' before scaling back considerably next month.

I placed orders with Critical Mass Games on Monday (arrived Thursday) and GZG on Wednesday? (arrived Friday), both in good time for this weekend. Jon also enclosed a message to let me know that more 'Crusties' are planned for the coming weeks.

My order with GZG included a wide variety of miniatures. First up, a platoon worth of the resculpted New Israelis to make up a 'short' company. But on opening the packs at the kitchen table I just knew I should have ordered more, as organising them into fireteams I could already visualise them in a second camo scheme - jagged black & blue-grey on white.

You won't be surprised that I really like these minis - particularly the leaders and the trooper on the right in the photo. You just can't not like them. Once again my thanks to Jon for listening and making sure the new sculpts included a good range of well chosen skirmishing poses.

Next, 2x V15-69A. Each pack contains three wheeled drones with autocannon. I'm going to base them in two's and my plan is to use them as a drone platoon that can be attached to any transitional or Mid-tech forces as required. I can easily see these drones also representing early mechanoid 'soldiers'. But for now, I'll park that idea in the back of my mind for another day.

Of course, I planned on purchasing 3 packs, one being V15-69B (missiles) but forgot to add it to my order. So it's on the list for next time round! 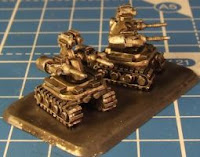 I did however manage to remember a pack of V15-68A Tracked Gunbots which come two to a pack. These are destined to provide support for my ASQL Mechanoid army. They are going to be based individually, though I do like what Jon's done with the FOW basing in the photo. Dinky little models! May get a second pack at some stage, possibly a third. I can see a game where the Gunbots give battle to an OPFOR of GZG Wheeled MAWPS. A complete scenario given over to drones and bots!

I added a second pack of V15-70 Mini Hover Drones (pack of 9). This gives me 18 of these nice little models in total. Nine drones will be mounted in three's as as you see here in the photo, but they will be on my standard 40mm round bases. This will form a UAV squadron to provide close protection and distance recon for my Combat Walker force.

The remaining nine will be based individually to support infantry forces. I would like to actually mount them singly on the same base as the infantry they support. My reasoning being, that they are part and parcel of the firepower of the unit and should therefore be integral to the base in order to demonstrate this.

Master Chef thinks I should mount them separately on individual bases for greater flexibility, as they can always be deployed 'touching' the owning base. He's right of course from a purely practical point of view - but I have this vision in my mind's eye...... 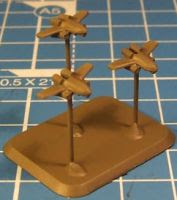 Also included another pack of V15-71 Mini Aero Drones, again 9 minis to a pack, bringing my total of these mini drones up to 18. I see these Mini Aero Drones purely as 'ammunition' to be based in two's and three's and deployed as one or two large swarms. Exact use on the tabletop will depend on scenario, but I have some ideas, such as point or barrier defence, search and destroy deployed by gunships or artillery.

Finally, I also ordered a couple of odds and sods such as a pack of SG15-U5 UNSC Kneeling and Lying, to finish off a company of UNSC. Plus a pack of characters and another of droids. 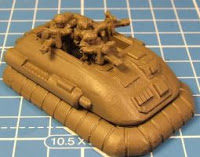 I had thought seriously about ordering the V15-PB74A ACAV (Air Cushion Assault Vehicle) platoon pack at £21, but and it's a BIG but, whilst I want them they take me off on a tangent right now, and that would burn into next month's reduced mini's budget.

Definitely on the wants list but maybe a useful thing up the sleeve as a nice and easy Christmas pressie from Heather, should she ask.

The Critical Mass Games order was nice and easy, but no less enjoyable to recieve. A platoon box of AFVH2 Scout Combat Walkers.