.
You'll remember that earlier in the week I ordered some new 15mm Modern releases from QRF. This included a Panther CLV (code MBRV04) to use as a post apocalyptic 'survivalist' wagon (more intel here). 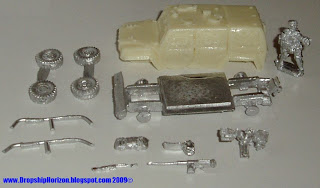 QRF 15mm Modern British Panther CLV
QRF Modern British figure for comparison
The vehicle itself is very nice and looks 'right'. The body is cast in a single piece of resin (49mm x 20mm). No bubbles or sink holes that I can see. It sits on a metal chassis and has metal detailing for you to add. All well cast.

One word of caution about QRF models. They tend to be very true to scale - this means that weapon barrels and smaller parts are very fine.

The plan at the moment is to distress the vehicle, add some additional bedrolls and kit but otherwise leave as is. I'll buy a second one in the future to 'Zombiefy' a bit more fully.

The comparison miniature is from pack MBI12: Modern British patrolling in berets. Nice 15mm British command figure. The others in the pack are in a mix of patrolling and covering poses. I'm going to change the berets worn into bareheads and wooly hats. Some of the kit will have to come off too. The idea being to turn the figures into heavily armed British 'survivalists' rather than military in this instance for a full UK retread of Undead States of America. Might even start this as a quick evening project next week.