.
I want to introduce you to one of my favourite models at the moment. The 15mm Khurasan Miniatures Pelagic Sea Wasp. 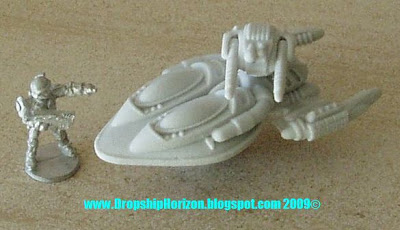 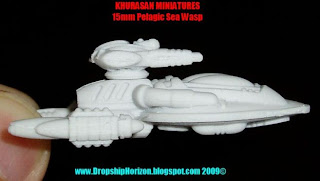 The model comes on a sprue with a selection of three 'turret options'. A twin laser turret, a remote grenade launcher, and a disk shaped attachment (radar/sensors?). The pack also contains a metal base. The photo below shows upper and lower detail of the main model with a Khurasan TTC-1001 Corporate Marine for comparison. Jon expects the price to be $4.29, but this is still to be confirmed. 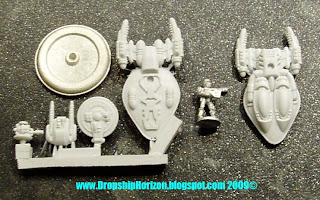 This is a small, dinky Grav flyer that has a myriad of game uses. In it's conventional role, it deserves to be deployed on the table in 'squadrons' rather than as a single unique model.

It's perfect as an Alien or even High-tech Human 'Flyer' in Alien Squad Leader but I think the Sea Wasp will also make a great high velocity 'escape pod', so I plan to use one as a crashed 'objective' marker within a variety of scenarios.

But mostly, I want to give the Sea Wasps an alternative role as 'rapid re-entry' stealth drop 'pods' used by Sci Fi Special Operations Forces such as Rebel Minis' Infiltrator miniatures. Imagine a Merville Battery style scenario, where Infiltrators are landing on top of a planetary defence battery to effect maximum surprise and disable the generators before the main orbital assault.