.
I saw this trailer SHATTERED HORIZON last night and was blown away! It depicts fast, furious Zero-G combat and is totally inspirational. I want to play this as a miniatures game!

Even if you don't like the idea of Zero-G combat or want something more realistic, there are lot's of scenery ideas to pinch from this trailer.

I'm already visualising 15mm figures, small asteroids/meteors and debris mounted on aerial stands in 'crazy' 3D combat. The figs can be mounted individually or in clusters for those who would prefer squad combat that can be replicated on the deckside or on the surface with your current figure basing. Simple rules to keep it fast paced and fun. 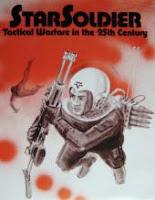 So, what minis? Well from GZG, New Israelis, UNSC, Armed crew figures in light duty vacc-suits, Heavy EVA suits, plus of course SG15-V12 Spacesuited crew in zero-G poses, light and EVA suits. Rebel Minis' Earth Force Marines, RAFM Infantry Pack No.1........ plenty to be getting on with even if many of the poses in the options cited might not be correct.

What do you think? Is there mileage?