Jon at Khurasan Miniatures informs us:

More 15mm vehicles are now available for the Pelagic Dominate, a galactic empire of mysterious sentient aquatics bent on the extermination of all terrestrial sentient life. They are the Sea Wasp light anti-grav vehicle, and a disposable Drop Pod.

The Sea Wasp operates as a nimble, deadly fighter in space or in high altitude, and, at low altitude or NOE, can act as a ground support vehicle or a scout, guiding massive artillery barrages with its advanced fire control dish.

Closely resembling the massive Man of War heavy anti-grav craft, the Sea Wasp is a great deal smaller and looks perfect as a small fighter craft, light hover tank or even a heavy drone. Though conceived to take one (invertebrate) Cnidarian as a pilot, the model can also represent a single seat fighter craft for a vertebrate, assuming that the pilot is semi-reclining like the driver of an M1 tank.

The second vehicle is an insertion pod for the arachnoid terrors which the Dominate spills atop the enemy to sow panic and disorder. Crammed into these pods, the mindless beasts swarm out and over the enemy's first line of defense, initially supported by a light grenade launcher mounted on the mast of the pod. 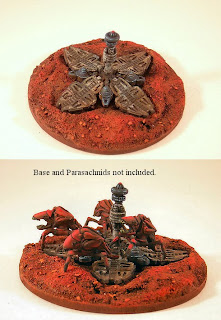 Of course the pod can also deploy your troopers in any game setting that demands aggressive planetfall!

Both are available now from Khurasan Miniatures.

Thanks for the intel Jon