Mad Robot Miniatures released their first 15mm minis this week (the Tachyon Mercenary Corporation Jump Troops), and Steve was kind enough to send me a review pack. I’ve been looking forward to these ever since the original discussion thread at TMP. Jump troops are a great science fiction trope, and many rules currently allow for this type of infantry to be used. But the 15mm sci-fi community has long been devoid of jump-pack/jet-pack infantry. Mad Robot has come to the rescue. 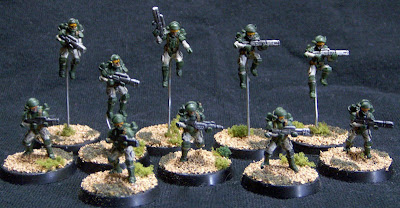 The TMC pack comes with ten minis, composed of six different poses. Half are airborne and half have both feet on the ground. They can be used as a complete 10-man squad, or one could swap “airborne” for “ground” poses to represent movement of a 5-man squad. The detail of the sculpts (and the castings) is very, very good. Other than a sliver of mold line on the helmets, these minis required no cleaning or trimming. The integrated bases on the “ground” troops are nice and flat - no Blue Moon-style “pitcher mounds” here. The flying poses come with no base at all - they could be attached to the ground or a small rock, or they could be mounted on wire or acrylic rods (I’m going to attempt the latter).

The weapons are a bit unusual for this type of release: three different weapons are clearly visible. Two appear to be assault rifles, and the third is definitely a directed-energy weapon. I really like this decision. Mad Robot Miniatures designed these as a mercenary unit. One can easily imagine that these troops purchase their own weapons with their signing bonuses - instead of being forced to carry an “off the rack” weapon, each trooper has the flexibility to buy, carry, and maintain the weapon that he is most proficient with.

And now for some possible bad news: these minis are VERY tall. I measured 18mm to the eye, around 21mm overall. At 1/100 this means the Jump Troops average 6’10” each. The NBA will probably watch their careers with great interest!

Does this pose a major problem? Maybe, maybe not. If you plan to use these minis to augment (or oppose) an existing human force - you’ll probably notice the difference. But even this could be explained away. Perhaps they are from a low-gravity colony world? Or, as my wife (the sci-horror writer) suggests, some sort of genetic enhancement or tampering?

But if you’re using these as their own force, especially if their opponents are aliens, their height won’t be an issue. They scale well to most aliens I own; in fact they look great alongside Crusties, Astagar, Garn, and some of the other “big” xenos.

Steve was up front with me about the height issue. And he assured me that future human releases will not suffer from this problem. This is Mad Robot Miniatures’ first ever 15mm sci-fi release. Other than that one flaw, I think they produced a great set of miniatures.

What would we like to see from them in the future? I’d start my wishlist with a second pack of these! Maybe we can see another Jump Troop set that’s just a few millimeters shorter (obviously!), uses identical/issued rifles, and includes one or two females in the pack. Including another NCO and some kind of heavy weapon would give us a great rank-and-file jump troop pack.