Paint Schemes
Of course, a pile of unpainted lead (pewter and plastic) will not stand.  I need colors.  I actually had stumbled upon my first (yes, I changed my mind and repainted a bunch!) paint scheme.  I needed a wounded “security personnel” marker and had used a NAC casualty marker for the job.  I had painted it in Catachan Green and a foundation yellow color and really warmed up to it.  I later switched out the yellow for a more “realistic” and, I think, better looking dark gray.

The combat cars and tanks ended up with a digital camo scheme.  I actually try to expand my skill set every project I do.  I had gotten out my airbrush and figured out how to make the masking and all the steps to get a really cool digital camo scheme going.  I was amazed how straight-forward it was and even put up a tutorial.  I’ve seen several blogs where people reference that they’ve used that tutorial to good effect. That’s pretty cool.

Since I was trying to emulate the 160th SOAR I painted the VTOLs in a matte black, using a matte varnish to give it a little bit of texture.  Also, lots of decals!  To make sure that the vehicles didn’t look bare it was important to put little doodads and decals to give it some depth.  I also managed to stumble my way into making my own decals, which worked out pretty well and I put my custom logo on most of the vehicles..

Terrain
With my Shadowrun/5150 project I had started building a city that I could use to run my games in.  I had always admired the World Works Games products, but never felt that I had enough patience to actually put paper models together.  Especially since they were designed for 28mm, although I knew that I could scale them down.  Then I happened to stumble upon the Streets of Legend.  It wasn’t very expensive and the only “putting together” that I would have to do is to cut out tiles.  I ended up purchasing and downloading the PDF and set about building up my city. 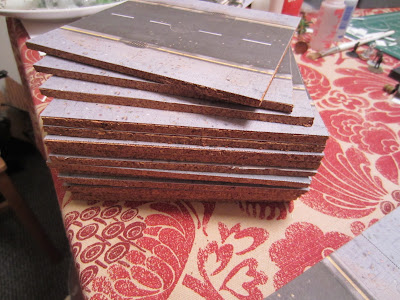 I actually put up another quick tutorial since I found that cork tiles worked the best for me in terms of storage and use.  I simply printed out the city street tiles at the normal size (since it worked just fine for me scale-wise) and then super-glued them onto the cork tiles.  Pretty soon I had a slightly larger than 2x2 board.

I used the excellent apartment buildings from Old Crow games (small and large) and the “Russian” apartment buildings from MBA that I got on sale a while back.  The MBA buildings are really cool since they split in two and become two ruined pieces. I added a HO scale lighted sign, printed out little posters and collect bits and pieces from HO scenery sets to really add some detail.

I also picked up the crates and boxes set from GZG (which work GREAT as cover) and the various furniture and dumpster sets from Khurasan miniatures.  I feel having all the details really add a lot, and you don’t need a whole lot to make a visual impact.

I also use the GZG colony set (which is very versatile) as little shanties.  My other board is a frontier planet colony and the GZG shacks work great there too.  I use cheap vinyl floor tiles that are 1’ x 1’ as a quick desert landscape.

I haven’t had a chance to game on these boards yet.  Honestly, the building, painting and collecting is the major part of the fun for me.  I always build a force rules-wise first though since that gives me a good guideline when collecting, although the “rule of cool” always wins!    I am currently waiting for 1.1v of the Gruntz rules to be released (soon!) and then we’ll start playing some games! 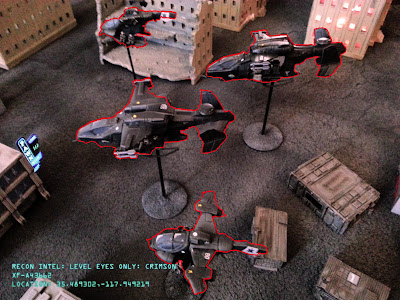 Conclusion
I hope I’ve shown the basics of how my project came together.  I am always on the lookout for cool things to paint and cool systems to play.  I like having a continuous narrative and believable consistency.


I'd like to thank Harold for taking the time to write this wonderful article for us and for sharing his vision. I hope you all have enjoyed reading through his thoughts and perhaps you fill find yourself inspired by something you saw or read here.