Those of you who follow PF's sculpting blog probably remember his Federation series of figures. It was a brilliant little concept (if not 100% original!) - an army of different humanoid aliens based around this core battle uniform: 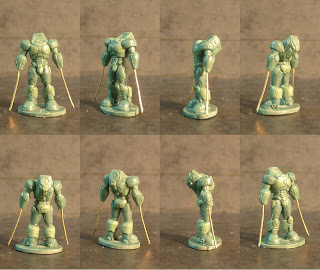 He then created tons of different head sprues to create the different aliens. Here is just one of many that were shown on his blog: 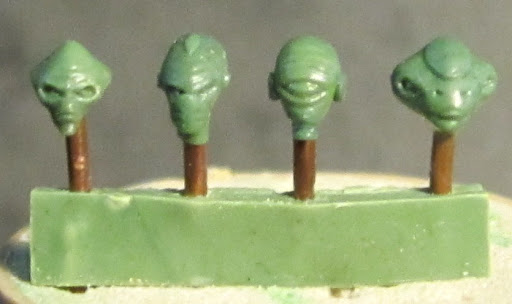 PF showed us a few of the finished troopers, but the Federation posts eventually tapered off. Well, now we know what happened to them. :) Two different packs are now available on the Rebel Minis website. Here is the Pangalactic Legion Command and Heavy Weapons pack, brought to life by Jeff Racel's paintbrush:

This pack would make a wonderful team of mercenaries or starport thugs in its own right. But if you want to play on a bit larger scale, here's the Pangalactic Legion Infantry Pack (which comes with 3 each of these eight sculpts):

I must say, the production result of these figures is quite impressive. While they lack the variety of truly alien physiques found in Khurasan's Jasmine Throne Foreign Battalions, the Pangalactic Legion looks like a group of tough, gritty warriors. And if you don't think there's enough variety in the Legion, Rebel Mike hinted that he would release a set of alien head sprues if there was enough demand...